So Raila wants national dialogue. That’s what Parliament is for

I like the issues that CORD wants to hold national dialogue on. They all make sense; the cost of living, rising insecurity and the alleged attempts to scuttle devolution.

While the cost of living affects every Kenyan, the degree to which each person can be cushioned is naturally tied to poverty levels and the gap between the rich and the poor.

One cannot help but notice that the political classes fall in the more easily cushioned categories, unlike the public whom they claim to present.

Insecurity and the threat of terrorism make the probability of dying on our streets, malls, churches or any other place almost equitably distributed among a good majority of Kenyans. Never mind that there is a whole dark underworld in this country with mass graves of unknown Kenyans, along with Mafia-like shootings on highways. We are informed by the police that the gangland-like shootings are indeed gang shootings. Who is safe?

On devolution, I must say the political classes are more privy to when, how and who is scuttling it than common wananchi. The public has barely begun to understand what role the counties will play in their lives, although counties like Machakos are illustrating their role in practice more clearly than it is possible to understand on paper.

So the opposition wants to have national dialogue on these issues. What do they call the houses of Parliament, and the county assemblies? Aren’t these the constitutionally designated houses of dialogue for our representatives to discuss issues in?

Why would they be expected – and why would the presidency be obliged – to constitute another forum for dialogue, say a conference that will cost tax payers millions, to discuss the runaway cost of living? Would this money not be put to better use in hospitals, schools and other institutions already in place to take care of public needs?

With the exception of Mr. Raila Odinga and Mr. Kalonzo Musyoka, all the other major players in CORD hold one public office or another. What scorecard have they used to self-evaluate, to come to the conclusion that another forum is needed to take care of public needs rather than their elected offices? Leadership cannot be dominated by physical presence. There has to be a way to channel issues through existing constitutional offices.

Evaluation and rating is not just for the opposition, it is for every elected leader in this country. Unfortunately the public is part of the problem in this country. It is alright to attend public rallies and misbehave on the streets while at it, but what is the actual output of such attendances? What benefits accrue to the public?  Should we be forever happy that we danced and shouted all afternoon and bullied the government and presidency? How does that make our country more secure, less expensive to live and how does that constitute enforcing devolution?

The government’s score card – which may be poor, if anyone has taken the trouble to create one – is the basis on which the public should air their grievances. Elected leaders should have a score card showing how they have tried to make things better using the constitutional offices they already hold, before trying to create new forums to engage. In any case the only justice national dialogue forum would be a referendum. Politicians cannot assume that their perpetual excitement on grave national matters gives them a monopoly on decision making. 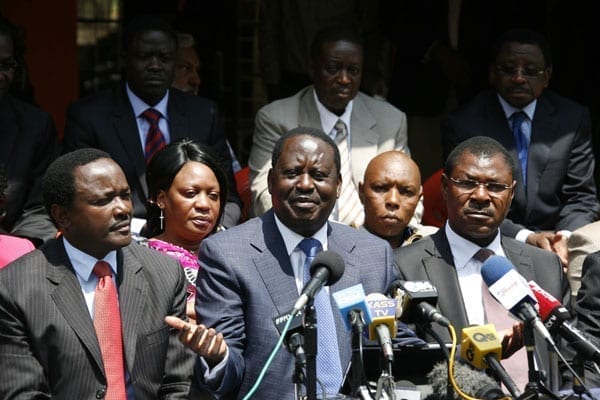 CORD Vs Jubilee: Nairobi assembly members engage in a brawl at City Hall-Video