The top US diplomat and East African leaders jointly blamed South Sudan rebel chief Riek Machar on Tuesday for continuing a war that has taken thousands of lives and may soon cause a famine.

ALSO READ  Shock:ICC dumped a witness and now his Life is in Danger in South Africa

“It is our judgment — and the former vice president, Mr Machar, needs to understand this — that it was his initiative that broke the agreement and took his troops back into a violent status,” Secretary of State John Kerry declared.

Mr Kerry made his comments on the sidelines of the US-Africa summit after a meeting on Tuesday with President Uhuru Kenyatta and leaders of three other Igad member states.

“The violation of the ceasefire has taken place by Riek Machar,” Mr Desalegn declared.

The Ethiopian leader then warned of unspecified “punitive action that has to be taken immediately after convening the meeting of Igad heads of state and government in Addis Ababa very soon after this summit.”

The rebel side failed to attend peace talks in Ethiopia on Tuesday, with organisers saying it was not clear why Mr Machar’s representatives had not shown up.

“Riek Machar is not in control of what he calls his army,” South Sudan President Salva Kiir charged prior to talks on Tuesday with Secretary Kerry.

“And so each commanders in different areas are operating on their own.”

President Kiir added that the war in his country “could have been resolved a long time back, but we get difficulty on the side of the rebels.”

Secretary Kerry, on his part, was warm in welcoming President Kiir to Washington and offered no criticisms of the South Sudan government in his remarks on Tuesday.

The United States has said since the start of the fighting last December that it regards President Kiir as the legitimate leader of South Sudan and would oppose his overthrow. 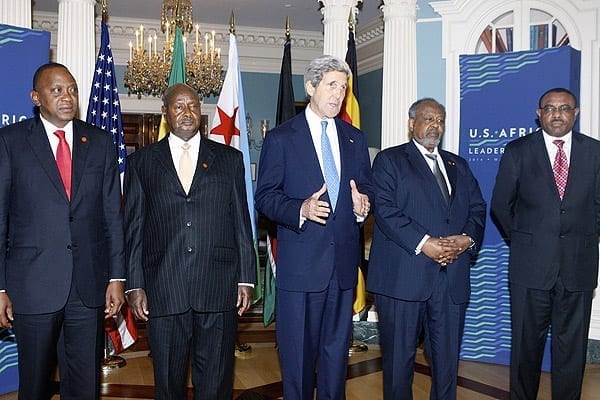