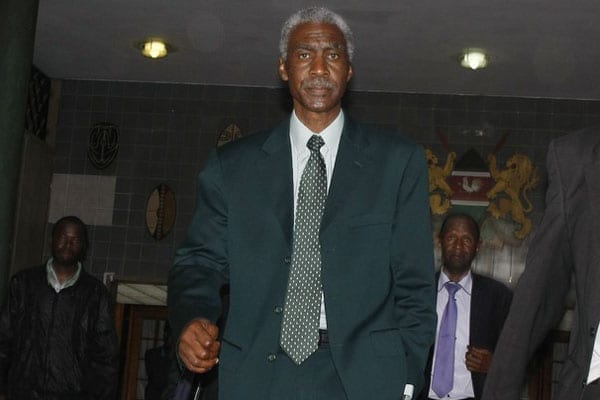 President Uhuru Kenyatta asked Intelligence Chief Michael Gichangi to resign because of lapses in security which have exposed the country to devastating terrorist attacks in the last one year.

Sources at the presidency told the Saturday Nation Friday evening that the National Intelligence Service Director-General was not working well with the Chief of Defence Forces Gen Julius Karangi and Inspector-General of Police David Kimaiyo.

The two had complained that Maj-Gen Gichangi, who is a former military intelligence chief, was “feeding the executive with information that could not be used”.

While Maj-Gen Gichangi has often insisted he has been giving intelligence which was disregarded, including the one in which he advised against the renewal of businessman Iqbal Wassim’s work permit suspected to be funding terrorism activities, Gen Karangi is said to have stood his ground that the former military chief was misinterpreting briefs.

Matters are, however, said to have come to a head on Monday when the two top chiefs bitterly quarrelled over a security tender our source could not divulge.

The presidency is also said to have been unhappy that Maj-Gen Gichangi contradicted the official government line that the Mpeketoni killings were precipitated by local politics and instead stuck with the Al-Shabaab theory.

“In both the Mpeketoni and Westgate Mall killings, the executive believes he gave the wrong information,” a well-placed source said.

The source added that President Kenyatta and Deputy President William Ruto were keen to build their own machinery on the security front as well as the public service, which they can trust to execute the mega projects in their manifesto, so as to solidify their legacy.

A group of new power brokers keen on weeding out survivors from the Kibaki administration have been piling pressure on the President against some influential government officers and Maj-Gen Gichangi is said to have been a victim.

The source said the “clean-up” will see all key officials inherited from the Kibaki era leave. Gen Gichangi retires in eight months.

Gichangi’s exit, the removal of powerful PS Mutea Iringo from the key Interior docket, as well the kicking out of political adviser Nancy Gitau from State House, completes the shunting aside of the key nerve centre of what is quietly referred to in the corridors of State House as the “Kimemia Mafia”.

Last year, President Kenyatta loudly complained of what he called a parallel government, which many interpreted to mean this powerful clique of officials from the Kibaki administration.

Also said to be marking time is Mr Kimaiyo “for failure to provide leadership”.

“That Kimaiyo is leaving is not a question of if but when,” the source went on, adding that both the director-general of the intelligence service and the inspector-general have security of tenure, but that “the latter can be asked to resign just the Gichangi way”.

The resignation on Thursday night of Gichangi has also sparked off a major succession battle for the difficult, but influential security position.

Maj-Gen Gichangi was the head of an outfit whose various reports have been relied upon by the prosecution on the ongoing trial against Deputy President William Ruto at The Hague.

It is in this light that Mr Iringo is also said to have been removed from the Interior docket to that of Defence. Dr Monica Juma has replaced him.

The ICC fallout has seen Mr Iringo clash with the deputy president’s legal team, after he was mentioned for implicating Mr Ruto.

A top Office of the President official also said that there are several administrative and accounting issues in the Interior ministry currently under review following the removal of key officers from various departments on the President’s order.

“Yes, I wanted him kicked out because I felt he had let the country down. I initiated a parliamentary move against him but I went slow to give him an opportunity to improve. The attacks continued,” Mr Mbuvi told the Saturday Nation Friday.

A month ago, opposition Cord leader Raila Odinga and Kalonzo Musyoka called for a total overhaul of the country’s security leadership.

Although there was speculation that Gichangi was forced to quit, State House maintained that he resigned voluntarily and that President Kenyatta had asked him to stay on to give him time to nominate his successor.

Mr Francis Kirinya, who is his official deputy, now leads the pack among possible candidates for the position Maj-Gen Gichangi has held since 2006.

Some at State House want Director of Military Intelligence, Maj-Gen Philip Kameru, nominated while others want the head of the Directorate of Criminal Investigations Ndegwa Muhoro to succeed him.

Former Police Commissioner Maj-Gen Hussein Ali, who was the President’s co-accused in the international criminal case at The Hague, has also been mentioned.

Mr Ali’s case was dropped by the prosecution.

Five other senior directors at the spy agency headquarters in Ruaraka are also potential candidates.

The agency that Maj-Gen Gichangi headed was started in 1926 by the colonial government, then a small department within the police force known as Special Branch.

Brigadier Boinnet was succeeded by Maj-Gen Gichangi who steered the agency through the transition process to National Intelligence Service under the new constitution.

Whoever is nominated by President Kenyatta will have to be approved by Parliament.

The approval in Parliament may not present any challenges to the President since his coalition has majority of members in Parliament.

The process is likely to attract political intrigues in view of the clout enjoyed by the holder of the office, who has direct access to the President.

National Intelligence Service and other security agencies have been on the spot following attacks in various parts of the country, starting with the Westgate in Nairobi September last year to the recent Lamu attacks where security officers were accused of laxity.

Although the top office holder at the spy agency office has a security of tenure, his appointment is deemed political given that he must be someone who has the confidence of the President.

The spy chief is the President’s chief adviser on national security.