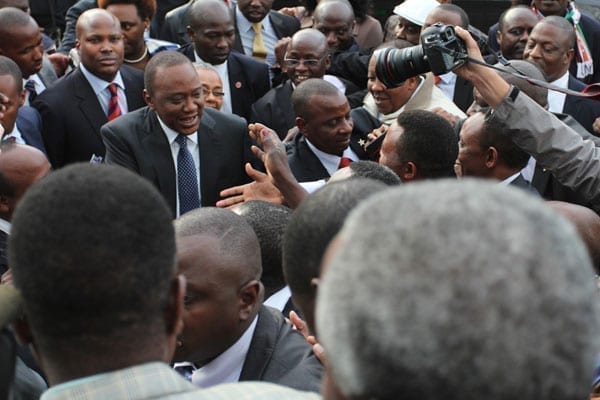 Drama and a bare-knuckle fight unfolded at the International Criminal Court Wednesday as the prosecution fought to keep alive its case against President Uhuru Kenyatta.

Mr Kenyatta’s lawyers want the case terminated, basing their arguments on the prosecution’s own earlier admission that it lacked sufficient evidence to sustain the case.

However, in a bold about-face, the prosecutors led by Ms Fatou Bensouda, said they did have some evidence after all but they needed additional information from the Government to corroborate it.

For example, the prosecution claimed, the President’s phone records showed that in the three days leading to the atrocities in Naivasha, a third of the calls that Mr Kenyatta received were from an MP from that area.

In a vigorous response, Mr Kenyatta’s defence team accused the prosecution of not trusting the information the defence was providing and said they will not provide any more information.

“Every time the defence provides evidence, the prosecution takes another turn. The prosecution keeps dismissing the evidence we avail to them. We have had no trust in the court with the prosecution and I have drawn the line on the sand: I will give no more evidence,” the lead counsel for Mr Kenyatta, Mr Steven Kay said.

Outside the court, Kenyans who had travelled with the President, notable among them Nairobi Senator Mike Sonko, were creating a spectacle with a noisy demonstration.

The President was photographed smiling but otherwise sat quietly through the arguments, having waived his right to address the court.

Trial chamber judges Kuniko Ozaki, Robert Fremr and Geoffrey Henderson will decide in about three weeks whether to drop the charges or grant the prosecution its request and declare that Kenya had not cooperated with the court and report it to the Assembly of State Parties. They could also make a ruling adjourning the case indefinitely.

Said lawyer Evans Monari: “We now are awaiting the ruling on the three requests before the judges. That is termination of the case; referring it to the state parties or adjourning it sine die (indefinitely). It can be in less than three weeks.”

Mr Monari, who was counsel for former police commissioner Maj-General Hussein Ali who was charged alongside Mr Kenyatta but was later let go, said delaying the judgement would have far reaching implications for both the President and the ICC. According to him, a decision is likely before the December recess.

The President was mobbed at the entrance of the court when he arrived shortly after 11am by MPs and others who had travelled to give him support.

“My client is entitled to the verdict of not guilty. There are no further enquiries going on and there is no evidence to continue with this case. If there was, we would have had a trial…everything I have heard from the prosecution confirms my application for Mr Kenyatta’s acquittal,” said Mr Kay.

He told the court that all the evidence that the prosecution was seeking from the Government of Kenya had been provided and accused Ms Bensouda of framing her requests for information in a manner that made it difficult for it to be provided.

“The nature of the requests (for information) by the prosecution resulted in legal and procedural hurdles. They should have specified the companies whose records they wanted. There was a search at the Lands registry and no records were found,” he said.

On financial transactions, Mr Kay said: “The records of foreign exchange transactions were also made available. The best evidence has been supplied and again I am not going to supply further telephone numbers.”

But Ms Bensouda said they had evidence and were only seeking to corroborate it before going to trial. She claimed that some evidence had been deliberately withheld by the defence and Kenya to ensure the case collapses.

Senior prosecuting counsel Benjamin Gumpert also argued that the information they requested had not been provided and asked the judges to adjourn the case, warning that if they let off Mr Kenyatta, they would have sent a message to other state parties to obstruct evidence and secure freedom.

“The court should guard against ending the case due to non-compliance by state members. The court has the power to regulate its proceedings and to do so in a manner that would ensure justice is achieved. It would require the court to take exceptional options. The decision on the request for indefinite adjournment is within the court’s powers,” he said.

“These are nine witnesses who will come to court to testify about the evidence that I have just summarised,” he said.

According to him, Witness 152 had said that he was present at a meeting in a hotel when Mr Kenyatta contributed money to finance Mungiki to carry out the attacks in Naivasha. He said that he had been approached and told that Mr Kenyatta was working together with them to defend the PNU side during the violence.

“He says he had been approached and told that Mr Kenyatta was in solidarity with them and will facilitate Mungiki to fight together with the PNU side of Kikuyus,” the lawyer told the chamber.

“The accused should have availed his phone numbers and those of his associates,” he said and urged the court not to end the hopes of victims getting justice.

KCFA Conversation with Ex-Diaspora Relocated to Kenya from the U.S