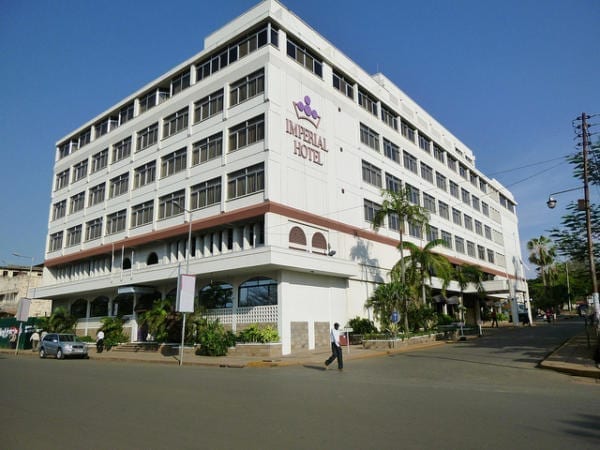 There are many incidences of reverse or just pure raw racism in the country. Many places you go to, you might never get service if you are too hip for the place. Especially when you are black.

This happened to the Naswa TV show crew who were doing many episodes of their popular show in many places in Nyanza province. So after the long week, on Thursday the crew decided to retire to Imperial Hotel in the lake side town of Kisumu to sort their own issues. The team led by Maxwell decided to pay the 6 man crew their pending allowance.

Maxwell was making the payments while the team were having lunch inside Imperial Hotel in Kisumu.

Within no minutes, the crew spotted two people in civilian clothes being directed to where they were sitting by a while man in hotel uniform. The two men identified themselves as police officers and ordered the crew to accompany them to the central police station. The crew obliged and while there, the CID boss informed them that hotel staff called to inform them that there were suspicious persons in their premises.

After being released without charge, the Naswa TV crew led by Maxwell went to the hotel to voice their concern regarding the incident. They complained to the duty manager who told them that he was acting on orders. He told them that ordinary residents of Kisumu have a hard time coming to the place because of the attitude of the General Manager.

Receipts and OB records from the Imperial Hotel incident The crew decided to go back to the police station to complain against the hotel harassment. The issue was booked on Police Occurence Book (OB) under record number 79 of 30th October.

The issue is bound to dent efforts to rescue domestic tourism as normal Kenyans get racially profiled and harassed by hotels which believe that locals are not high profile to warrant their attention.

Our investigations reveal that it is a Francois van Wyk who is said to be the hotel’s General Manager who called police on the TV crew. Mr Francois is said to have a direct contact with the police and so that is what he used to call them to harass innocent clients just having lunch and paying their bills at the hotel.

The General Manager is a South African who grew up during apartheid and so he might still have remote racism in his mind. His LinkedIn profile shows that he doesn’t have much experience outside his country.