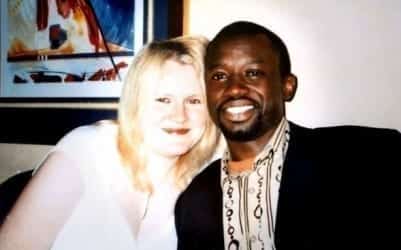 A young bride has claimed her husband was only interested in her to get a visa. 38-year-old dog lover Michelle’s marriage ended the day after she and her husband renewed their vows when she discovered he had fathered someone else’s child.

After the pair got together they had a whirlwind romance which soon saw them trying for a baby.

She said: “He was gentle, quiet, caring, charming. Unlike other men.”

Michelle’s brother-in-Law Iain was also impressed, in the documentary he adds: “He introduced me to his family and he was really caring.”

Michelle told the Channel 5 documentary Got Hitched, Got Ditched that things started to crumble when she was whisked away to Gambia to be married.

Due to the distance none of her family could attend.

“It was nice but scary because there were hundreds of people there that I didn’t know.”

When they returned they went for IVF to try for a baby but things didn’t work out after the third attempt.

Before she knew it Michelle’s partner was soon going out all the time and then a mystery woman was on the scene – who he said was his cousin.

After seeing them together on Facebook Michelle was told that the woman in question was her partner’s cousin.

She said: “That’s when I found pictures of him with a baby on someone else on Facebook. Everyone else was saying congratulations to him.”

At that point her partner confessed that the baby was indeed his.

Whilst Michelle was desperate to have a baby her husband had fathered a child with someone else.

“Something blinded me, I just loved him so much,” she said, after forgiving him and deciding to renew their wedding vows.

Watch the video above as Michelle’s worse nightmare came true. Within 24 hours of renewing their vows her husband had disappeared.

“I found out that he got his visa through on the July… I felt like I was used for that. I never thought we’d get divorced.”

Since the show was made Michelle’s ex said: “Yes Michelle thought my other woman was my cousin. I’m no longer with her… I’m with someone else.”

Also in the episode, there are other marriages that have gone wrong before they had barely started.

How Trump orders will affect some Kenyan women, Dadaab refugees