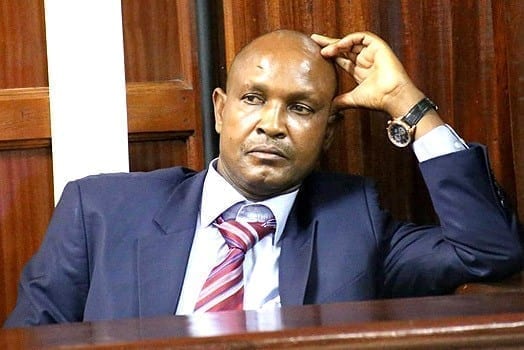 Police are investigating Imenti Central MP Gideon Mwiti over claims that he brutally assaulted and raped a woman who visited him in his private office in Westlands on Saturday night.

Parklands police have received a complaint from a 29-year-old woman who is now admitted at the Nairobi Women’s Hospital.

The MP admitted meeting the woman on Saturday afternoon, the day she claims to have been attacked, but vehemently denied raping or beating her up.

It is the latest in increasing cases of sexual violence, especially against women and children.

Only last week, a British paedophile was jailed after he was found guilty of preying on Kenyan boys in Gilgil where he was an aid worker for two decades. And last month, another MP was accused of sexually harassing a female member of his staff, including sending her offensive messages. The matter was later resolved out of court.

According to the 2008/2009 Demographic and Health Survey, 45 per cent of women aged 15-49 have experienced either physical or sexual violence.

And according to the Gender Violence Recovery Centre at the Nairobi Women’s Hospital, at least eight to 10 cases of gender-based violence are reported to the institution every day. Most of these are rape and 65 per cent of the attacks are committed by a person known to the victim.

In the latest case, Mr Mwiti — popularly known in his constituency as Livondo — had allegedly invited the woman for a business meeting in his fifth floor office at Krishna Centre on Woodvale Groove on Saturday evening.

The MP was a director of the Kenya Akiba Micro Finance Ltd, which was behind the pyramid schemes in which Kenyans lost millions of shillings. He runs a bar across the road from his private office.

The assault and rape allegations against him were reported at Parklands Police Station yesterday and police said they were investigating the matter.

Speaking from her bed at the Nairobi Women’s Hospital, the complainant, a 29-year-old married woman, yesterday accused the legislator of beating and repeatedly raping her in his office.

“I had been meeting him since last week and my husband was aware of the meetings and the business plans we were conducting,” she said.

When the Daily Nation contacted Mr Mwiti, he initially claimed that he did not know the complainant, but later acknowledged he knew her.

However, he denied the rape allegations, saying the woman could have been assaulted by other people at his bar.

“If there was a woman in the bar, how do I know?” he asked. “Probably the incident happened within my bar. However, if there was an incident like that, let it be investigated.”

On further probing, he admitted that he knew the woman and had met her on Saturday, the day she said she was assaulted.

“I know her. She is doing some public relations work for me. She was in my office from 4 to 5pm,” he said.

The woman said she met Mr Mwiti twice last week over some projects she was to undertake for the legislator.

“I was introduced to him by my husband and it did not occur to me that he could be a rapist or someone who could harm me,” she alleged.

According to her, she was in his office at about 8pm. After ushering her in, they started their discussion but Mr Mwiti started taking alcohol, she claimed.

They were four in the office, with two other men she described as the MP’s aides, one Titus, who runs the bar and a Mr Mwangi. After a while, a medical doctor (a Dr Mwangi) arrived and was ushered into the office while the aides stepped outside.

“I asked the doctor to give me his card which he did,” she said. When she asked to be allowed to go home, she said, the MP grabbed her bag and started beating her again.

“He beat me so badly. He hit me, kicked me and I was on the floor. He continued beating me and I had to accept to be tested,” she claimed.

The doctor, who was waiting outside as she was being beaten, returned to the room and took a blood sample. She said she requested to be allowed to visit the toilet inside the office and while there, she called her husband. She alleged that Mr Mwiti started banging on the door but she managed to send a text message to her husband, asking him to rescue her.

Mr Mwiti yesterday said that the victim’s husband was his friend and wondered why he reported the matter to the police before calling him. “I know the husband. He is my property valuer,” he said.

“I was with my pastor and other constituents at Njugunas on Waiyaki Way then left for my bar in Westlands at 6pm. We stayed there until 6am and I did not leave them,” he said.

One of the SMSs obtained by the Daily Nation that the woman sent to her husband read: “I am opposite Bandari Plaza, come. I am texting from the toilet. The MP you introduced me to meet him has asked for sex and when I refused he beat me up…Westlands please come.”

According to the woman, when she took too long in the toilet, Mr Mwiti broke the door and dragged her out. She started yelling for help but this only made the MP angrier, she said.

“He beat me up and tore my clothes. He also told me to stop behaving as if I did not know what he wanted. He then tore my clothes off and he raped me repeatedly,” she alleged.

According to her, after he had assaulted her, Mr Mwiti ordered more drinks, which Titus brought.

She said the MP tried to force her to drink but she refused. Later, he demanded that they leave together and she says she obliged, she told the Daily Nation.

Titus, who had accompanied the MP yesterday afternoon, said that he saw the woman but denied allegations that she was raped. When contacted, the doctor accused of forcing the woman to take a HIV test disconnected the call.

The woman said that as they were leaving the office, she ran away and took a taxi, which took her to where she had parked her car. The taxi driver escorted her to her home in Kileleshwa.

As the woman was being subjected to her ordeal, her husband was trying to locate Mr Mwiti’s office.

“I knew the MP’s office but I did not know he had other offices within Westlands,” he told the Daily Nation.

Later in the night, when he got home, he took his wife to hospital where she was still being treated yesterday.

He said the MP contacted him and requested that they meet to iron out the matter but he refused.

He said the MP had threatened him, but vowed to seek justice for his wife.

“His wife and associates also called me so that we could talk but there is no way,” said the man, who will not be named to protect the identity of his wife.

“He turned into a predator on a prey he deceptively made vulnerable through family and business trust. The police have recorded her statement.

We demand that the said doctor and the MP must be arrested and charged no later than tomorrow. This is indeed an open and shut case,” he said.

A marriage of convenience