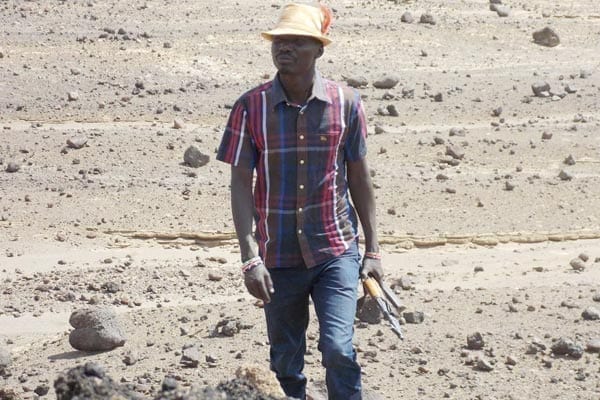 The MP, armed with an AK-47 rifle, the leaders and police pursued the raiders for three days and laid an ambush in the Suguta Valley.

They overpowered the bandits after a three-hour gun battle. The raiders fled and left the livestock.

The team braved the rugged terrain, hot temperatures and limited food supply in the mission to recover the livestock stolen from Kangirisae, Lomunyenekwan, Nakalei villages in Turkana Central Sub-County.

Kenyan MP Caught Up in Ugly Baby Mama Drama After…

The lawmaker was attending a peace meeting in Kerio on Monday when the group was informed that bandits, suspected to be from the Pokot community, had attacked herders and stole the animals.

The meeting was called off and in a fleet of nine vehicles, the leaders, police and herders travelled to lay an ambush at two known escape routes in the Suguta Valley.

The police reservists and herders were on the frontline as Administration Police, regular police and political leaders covered them.

They recovered the animals at 6pm on Wednesday after a fierce the gun battle.

“It is out of the pain and suffering residents are exposed when their only source of livelihood are stolen by bandits that inspired us (political leaders) to take part in the recovery exercise despite the risk of death,” the MP said. He claimed the raiders were heading to Silale Location in Tiaty Sub-County.

He called on Tiaty MP Asman Kamama to step up peace campaigns in his constituency, where the bandits are alleged to have come from.

“My colleague, Mr Kamama, owes Kenyans an explanation why all (the) other 10 bordering sub-counties have embraced peace but people in his sub-county are repeatedly raiding Turkana,” said Mr Lomenen.

A police helicopter dispatched to pursue the bandits arrived after the livestock had been recovered.

Those on board the helicopter were Rift Valley Regional Police Coordinator Gideon Amala, Baringo County Commissioner Peter Okwanyo and Turkana East MP Nicholas Ngikor and they landed in Kamuge Village, about 60 kilometres from the Suguta Valley, where the animals were recovered.

Isaac Ruto’s next plan after missing out cabinet appointment

Untold story of Cord’s search for the ideal 2017 candidate

How I manage to invest in Kenya while abroad

DEVOTION:Are You One Of The Few?