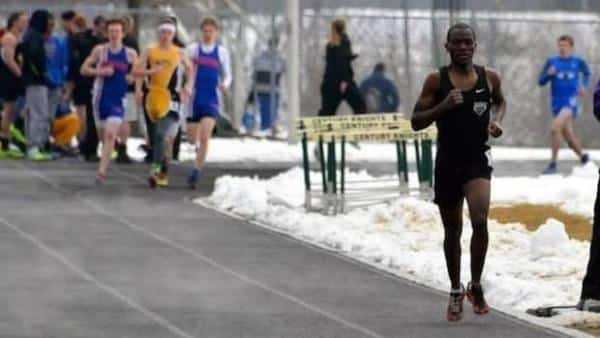 After looking at results this past week from a quad meet with Northwest, Poolesville, Sherwood, and Thomas S. Wootton, we had to ask the question….who in the world is Branson Oduor? We were completely miffed as a runner from Northwest High School that we had never heard of or wasn’t on our radar entering this season had just defeated soundly by nearly 30 seconds two runners coming off strong top 3 performances in invitational races in Poolesville’s Andrew Lent and Wooton’s Colin Sybing.

We clicked on his MileSplit athlete profile and saw very mediocre track times for someone who just ran 16:20’s for 5K in a weekday quad meet. Just under 2:10 in the 800 and mainly running 1600 times in the 4:50’s range. We looked him up on facebook and saw that he has a hometown listed from Kisumu, Kenya. Does Northwest have a Kenyan native on their squad? Okay now this is starting to make sense as we fill in the gaps of information holes. Okay not really. Still lots of mystery and why we are anxious to see this Branson Odour race on Saturday at the Oatlands Invite! Especially leading a dark horse contending squad in Northwest (winners of Brunswick Invite two weeks ago without him) and racing individually against 7 of the top 15 ranked runners in the state of Maryland currently.

And yes, there is more than one Kenyan in the Northwest High school cross country team. Bobby Gicheru, the son of Isaac Kariuki of Diaspora Messenger is also part of the team and will be participating in the Oatlands Invite on Saturday September 19th, 2015. Bobby, who is a soccer player, and played soccer for his high school team last season, switched to track and field events. Though it was his first time running, he managed to make it all the way to the finals in his regional meet running the 110 meter hurdles where he emerged 8th overall in the region this past outdoor 2015 season. He is now running cross country for Northwest and has been included in few meets this season including the Oatlands Invite on Saturday. Bobby in the MoCo County meet