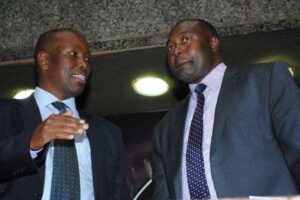 PUBLIC transporters and traffic police yesterday traded blame for the road carnage at a forum on safety in Nairobi.

“Police do not report on the roads to enforce the law but to collect revenues for themselves and their bosses,” Matatu Owners’ Association coordinator Albert Karakacha said.

“Each traffic officer is required to seize five vehicles and deliver Sh10,000 to their seniors every day.”

“Why have you turned driving licences into your wallets?” he said.

“Why do you put money on the doors and rear wipers?”

He said the drivers offer bribes that are higher than the fines they are likely to get in court because they know they have even forged driving and PSV licences.

“The relationship between matatu industry players and NTSA is akin to that of police and a thief,” he said.

“Sometimes NTSA officials pounce on vehicles and pluck off number plates as drivers attempt to flee.”