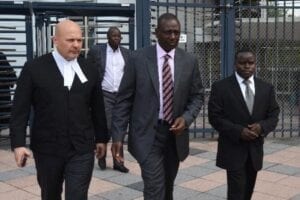 The government has again requested the United Nations Security Council to defer the case against DP William Ruto and journalist Joshua Sang at the ICC.

In a petition to the Council dated October 20, Ambassador Macharia Kamau said requests made have not been met with due consideration despite several discussions, adding that the AU remains “actively seized of this matter”.

“The concerns of Kenya and the African Union remains unresolved to date and the case at the ICC continues to pose serious problems,” Kamau said.

The ambassador said the case poses political and social distraction within Kenya, which in turn “undermines and threatens the immediate and long-term political stability of the subregion of East Africa and the Horn of Africa”.

“These concerns remain of such grave concern, and recent developments as contained in the appended petition are of such an alarming nature, that Kenya is once again compelled to resort to the council for leadership and immediate action on those matters with a view to seeking the immediate deferral of the case.”

Kenya also requested the opportunity to physically present the petition, which was signed by 190 legislators to the Council.

During the Summit in South Africa, the AU Executive Council called for the termination or suspension of charges against DP Ruto until their proposal to amend Article 27 of the Rome Statute is considered.

Uhuru is playing someone: Is it Raila Odinga or DP William…

On October 17, ICC judges “refused to be bullied and abused by Kenyans” and the media, who oppose the trial of Ruto and Sang.

Presiding judge Chile Eboe-Osuji said Kenyans should let the court handle the case without directing “abusive commentaries” at the ICC.

But President Uhuru Kenyatta said ICC judges cannot tell Kenyans whether or not to pray about cases “because we know the value of those prayers”.