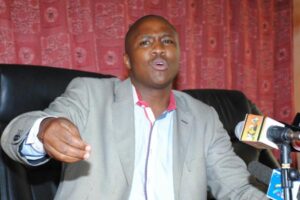 He said President Uhuru Kenyatta had the capacity to free Ruto from the ICC, but his allies were using the issue to contain the DP and cripple him politically.

“He is a like a woman who is married and is battered always but can not quit the marriage because he is threatened with other consequences,” Keter said during an interview on Kass FM.

The MP said Ruto had been turned into a “political hostage” and could not “fight for the rightful share of the Kalenjin community”, citing the DP could not raise issue about “several people from Rift Valley who had been sacked from their positions”.

Keter claimed Ruto was “intimidated” into pushing Kalenjin MPs to withdraw their signatures on the impeachment motion against embattled Devolution CS Ann Waiguru.

“When Ruto asks about Waiguru, they tell him about the ICC cases yet the two issues are not linked at all,” he said.

This comes a week after two other Kalenjin MPs said they will not negotiate for political alliances with Jubilee partners in the 2017 polls, unless Ruto is freed from the ICC cases.

Kapseret MP Oscar Sudi and Ainabkoi’s Samwel Chepkonga said they would “not engage in politics yet the Kalenjin community is the one left at The Hague”.

“As MPs from Rift Valley we have agreed that we will not talk about the 2017 polls until Ruto and journalist Joshua Sang are free from ICC,” Sudi said.