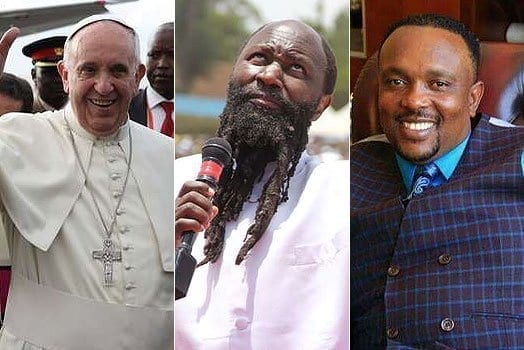 Despite delivering highly inspiring homilies, Pope Francis has become a global symbol of humility and modesty in a world where extravagance and lavishness are the hallmarks of the life of the high and mighty, including religious leaders.

On his first visit to Kenya, Pope Francis left a vital lesson on humility and modesty by riding from the Jomo Kenyatta International Airport in a modest car — a Honda Ballade.

This was in stark contrast to the large motorcades comprising top-of-the-range fuel guzzlers his host by President Uhuru Kenyatta drove in.

Way back in September, the pontiff, left a lasting impression on Americans when he rode in a tiny Fiat 500 on his first visit to the United States.

Kenyan religious leaders on the contrary, have become accustomed to lavish lifestyles, moving around in huge motorcades complete with gun-wielding security details.

One of them is Prophet Dr David Owuor.

Whenever he is in the country for his crusades, Prophet Owuor drives in presidential-style motorcade with police outriders clearing the way for the man of God.

Pastor James Ng’ang’a of Neno Evangelism is another church minister fast gaining notoriety for getting involved in road accidents while driving his top-of-the-range cars.

Only last Saturday, Pastor Ng’ang’a was reported to have been involved in a road accident at Gitaru area along the Nairobi-Nakuru Highway while driving a sleek BMW X6.

The accident came just four months after he was allegedly involved in an accident in the same area that claimed the life of Ms Mercy Njeri, who was with her husband, Mr Martin Mbugua.

He is alleged to have been driving the red Range Rover Sport the police said hit the couple’s car.

A case is pending in court.

Mrs Kiuna has talked about her opulence, saying: “God wants us to be prosperous in every single way. His desire for us is to walk in abundance.”

Nigerian billionaire pastor David Oyedepo of Winners Chapel on Likoni Road landed in Nairobi in style, aboard his private jet and was driven off in a motorcade comprising of Range Rover Sports cars.

Some Kenyan Catholic priests and bishops, too, have been known to have a fondness for lavish cars and houses and a general appetite for the luxurious lifestyle, a stark contrast to their leader.