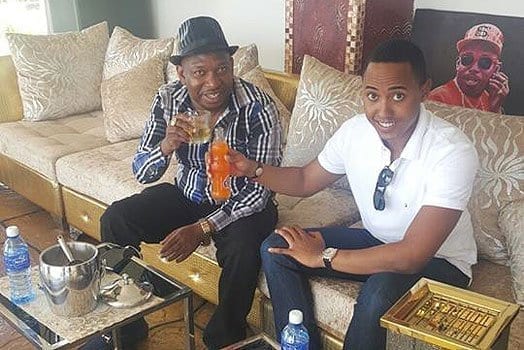 Nairobi Senator Mike Sonko on Thursday revealed details of a plot to have President Uhuru Kenyatta’s youngest as his running mate in the 2032 presidential election .

The flambouyant senator let out the secret while celebrating his birthday at his Mua family farm, in Machakos.

Senator Sonko, who has repeatedly posed himself as the sixth president after the reigns of Uhuru Kenyatta and William Ruto, said his running mate in 2032 general election will be Muhoho Kenyatta.

“Today I was joined by my lovely wife Lady Primrose, my friend/ my running mate 2032/ FP (God willing after the DP and myself) Mo, among other friends, in celebrating my birthday in style by staying indoors at my Mua Family Farm,” posted the senator on his Facebook page.

The young Muhoho Kenyatta has been accompanying President Kenyatta in high level engagments both locally and abroad, raising speculation that he is being groomed for the country’s top seat.

A fashion designer by profession, Muhoho is believed to be dating Firyal Nur Al Hossain, a designer and founder of the Nur clothing label. The two visited Kenyatta National Hospital and donated diapers to children admitted at the facility.

Firyal is the daughter to the Cabinet Secretary for Foreign Affairs Amina Mohammed.

Sonko celebrated his belated 41st birthday while downing his late father’s favourite whisky. In photos of the event, he is seen posing with an opened bottle of whisky next to his father’s adorned grave.