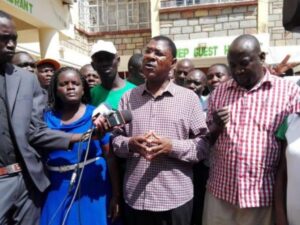 Ford Kenya is expected to meet on Friday to reconsider its position in Cord, and there are indications the party may bolt from the coalition.

Some party MPs have been calling for the postponement of the general council meeting to give the National Executive Council time to prepare the agenda. But secretary general Eseli Simiyu yesterday said the meeting will go on. “As far as I know, the meeting is on this Friday. The NEC will meet before the general council so there is no need to call it off,” said the Tongaren MP.

The Star has established the NEC- cum-parliamentary group meeting will be held today. Atop the agenda of the general council meeting is the chaos in Kakamega two weeks ago that marred party leader Moses Wetang’ula’s presidential bid launch.

But Kanduyi MP Wafula Wamunyinyi (Ford Kenya) dismissed claims the Friday meeting is premised on the chaos, largely blamed on Kakamega Governor Wycliffe Oparanya, a key ally of Cord leader Raila Odinga. “The meeting has been on the party’s calender for a long time. We will meet to review party activities and how we can move forward. It has nothing to do with severing our ties with colleagues,” Wamunyinyi said.