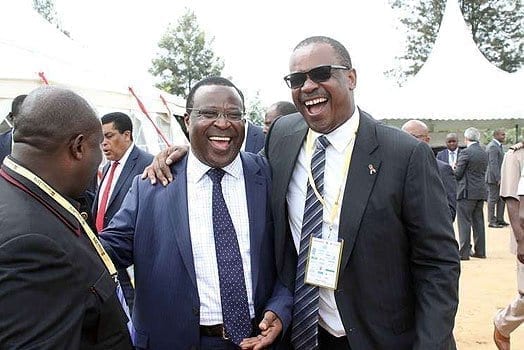 It was billed as the biggest show in Meru after the Ameru festival. And it lived up to the reputation on Wednesday morning when thousands of county chiefs and their battalions of advisers and hangers on sauntered into the eastern county for the third devolution conference.

The vehicle of choice for the governors was definitely the Toyota Prados as many were driven in with the ‘beast’. But the one who stole the show was Nairobi’s Evans Kidero.

As five governors were awaiting the arrival of the Namibian Prime Minister, Governor Kidero drove in with riders and three escort cars fitted with blaring sirens.

The assembled governors rushed to the vehicle thinking it was the PM.

“Ni mimi bwana (It’s me). Relax,” said Dr Kidero as he walked out and greeted his fellow county chiefs.

It was not lost on many that the Nairobi county chief motorcade had sirens, which governors are not supposed to have.

Confusion also characterised protocol officials after some members of the Senate complained that organisers had even forgotten to place tables on the VIP podium.

The Namibian Prime Minister, Chief Justice Willy Mutunga and the rest also at some point had water but did not have glasses.  One of them had to gesture for a glass. Five appeared and thirst was quenched.

You could identify the cutlery governors would use by the vehicle it came with. For other delegates, it was brought in by an outside catering van. But the county chiefs’ cutlery was brought in by the  Toyota Prado.

The media centre was moved three times, finally ending up behind a pack of generators where journalists could hardly hear one another.

And the flags adorning the venue was a lesson in animal husbandry and history. Most county flags have either animals or plants. Nakuru’s emblem is a flamingo, Makueni a bunch of fruits. Vihiga’s is a chicken.

But the conference was overshadowed by the fight between Meru Senator Kiraitu Murungi and Governor Peter Munya.

And delegates who attended the conference woke up Wednesday morning  to find a magazine in most hotels being distributed for free that seemed to take a low blow on the governor.

Under the headline ‘Munya’s reign of terror and plunder’ the political rag known as Meru Confidential  tore into the governor with Shakespearian English and idioms that showed the writer has a way with words but needs a lesson in decorum and spelling.

“Munya has become an oracle…he has reduced the county to a commercial aristocracy with sycophants whose core function is to project him as an object of idolatory (sic),” one of the sentences read.

But to visitors, Meru also served its set of peculiarities. The first thing that delegates found strange, but residents are used to, is the incessant hooting by small cars as they passed by shops along Meru streets.