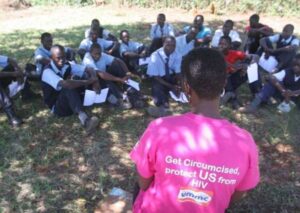 A male circumcision campaign in Nyanza started by the government in 2008 to curb HIV infection has been a runaway success.

The Voluntary Medical Male Circumcision campaign was launched following concerns about the high HIV prevalence rate in the region.

Luo Nyanza makes up less than 10 per cent of Kenya’s population but accounts for nearly half the country’s HIV burden, according to the National Aids Control Council.

In 2001, a World Health Organization-backed study showed that circumcision, which the Luo do not practise, reduces HIV transmission in heterosexual couples by up to 60 per cent.

The Ministry of Health used this information to start the campaign amid mass resistance. Its target was to circumcise 860,000 men by July 2013.

Today, statistics from the Aids Control Council show that between 2008 and 2013, more than 950,000 men were circumcised.

This huge success is attributed to buy-in by the political class in the region, particularly the Odinga family.

When the campaign started in 2008, there was widespread grassroots opposition — and politics was at the heart of it.

This was a year of political upheaval in Kenya and the country was suffering from the aftermath of the 2007 disputed presidential election results.

Mr Raila Odinga, the region’s political kingpin, was at the forefront of the opposition against incumbent Mwai Kibaki.

In the run-up to the election, Mr Odinga was derided that he could not lead Kenya supposedly because being Luo, he was not circumcised.

When he disputed the results, all hell broke loose and some 1,133 Kenyans were killed and nearly 600,000 displaced in the violence.

Some of the Luo victims of the violence were forcibly circumcised in Nairobi, Nakuru and Naivasha.

PREVALENCE RATES
Thus it was the worst possible time for the government to roll out the campaign in Nyanza.

Luo Council of Elders Chairman Mzee Nyandiko Ongadi told Saturday Nation at his home in Kendu Bay: “That we do not practice circumcision had been used to despise us, make us feel like we are not worthy of national leadership … so when the doctors came here we asked them ‘Are you trying to make us lose pride in being Luo and be like the rest?’”

But Prof Agot Kawango, the lead researcher in the WHO study, had her data.

Statistics in the other counties in what is known as Luo Nyanza were not encouraging either. Siaya’s rate was 17.65 per cent, Kisumu 17.75 per cent and Migori 18.05 per cent.

Interestingly, neighbouring counties whose males circumcise had very low prevalence rates with Kisii at 5.1 per cent and Nyamira at 6.4.

Vihiga, Kakamega, Narok, Kericho and Bomet have a prevalence rate as low as 3 per cent.

The truth was staring officialdom in the face — circumcision can be a major factor in the war against HIV but could they use this information to convince a sceptical Nyanza?

In September 2008, the Health ministry organised a meeting in Kisumu of politicians, elders, chiefs and opinion leaders to explain the “saving potential” of the cut.

After the meeting, Raila said: “I know circumcision will raise a lot of eyebrows but there is evidence that it reduces infection by as much as 60 per cent. We must face reality. We should not just say it is not our culture. We should put more emphasis on the reason we are doing it.”

After this statement, the number of men flocking to clinics for the operation shot up.

Dr Oburu Odinga told Saturday Nation why he and his brother bucked opposition from the public to endorse male circumcision.

“I was tired of burying people every weekend in my constituency. The deaths had increased four-fold so I seized on any solution that came my way even though there was a lot of opposition,” he said.

The then Bondo MP even publicly announced his decision to get the cut. Eventually, he did not get the procedure.

“I am diabetic and old, so the doctor advised against it,” he explained.

But his announcement and Raila’s endorsement helped change the tide in favour of the procedure in a big way.

Dr Benard Ayieko, the programme coordinator of circumcision at Impact Research and Development Organisation (IRDO), which provides the service in Nyanza, says the effects of the Odingas’ endorsement could be seen at clinics as long queues of men formed.

Mr Jacob Ochieng, 28, of Kaksingri, Suba, one of those who lined up for the cut in 2008 says: “People said the doctors were using the cut foreskins for rituals, that they were planning to inject us with infected blood so that we would all die. But when Raila said it would help us, I knew I had nothing to fear because I knew he would not let us die.”

Dr Oburu says that the politicisation of the foreskin could have played a role in the initial resistance.

He narrates the few times when he came across the word kihii, a derogatory Kikuyu name for an uncircumcised man.

“In 1966, Jomo Kenyatta disagreed with my father and Bildad Kaggia took my father’s side, to which Jomo responded ‘Kaggia, why are you following a child? That really hurt my father,” he says.

Dr Oburu said during the 2007 campaigns, his brother Raila had been insulted because of the cut.

“I have personally never been attacked along those lines, but when I am standing by my brother and I hear people who we have called friends tell him that, I cannot separate it from myself,” he says.

Maseno University lecturer and political analyst Tom Mboya says that while circumcision needs to be discussed in the context of health and not as a determinant of elective politics, it has been a scapegoat for the political class in Kenya.

Dr Salome Bukachi, a medical anthropologist at the University of Nairobi, says most medical interventions fail to make the impact they are intended for because health experts overlook history.

In Nyarongi in Homa Bay, Dr Bukachi’s observation is brought to the fore by a retired teacher. Job, the only name he asks us to use in this article, lost a son and daughter-in-law to HIV.

Job had opposed wife inheritance because he knew its role in HIV infection.

SHALLOW INFORMATION
However, he opposed circumcision until he heard from the political class. “This is a sexual organ we are talking about here, one that can not be repaired once damaged. It is the tool that ensures continuity of generations and I am certain no politician wanted to put the numbers at risk,” he says seriously.

But the politicians did not explain the matter of the 60 per cent protection properly and consequently, some men believed they were completely safe from HIV sleeping with the first 60 women.

This, some have said, has had the effect of increasing promiscuity among circumcised men. Prof Kawango says there is no data to support this claim.

What is not in doubt is that the number of circumcised men in the region has shot up and the impact on infections, prevalence rate and deaths can already be seen.

The number of people dying from Aids related complications has also gone down. Indeed, nationally it dropped from 85,840 in 2009 to 58,047 in 2013, according to the Kenya Aids Response Progress Report 2014.