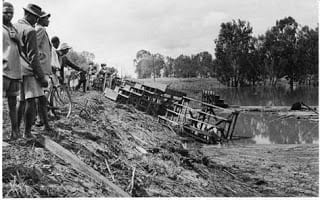 When Nairobi was hardly eight years, the administrators were warned that they had done a mistake by allowing the building of a town in a treeless windy plain where residents were constantly baked by the African sun.Medical officers warned in 1906 that the grounds were soggy and urged Sir James Hayes Sadler, the then Commissioner of the East Africa Protectorate, to plead with London and have the town moved. As usual, bureaucracy reigned and railway interests surpassed the wishes of the majority.

One has to look at the 1902 letter written by Sadler and which said in part: “Doctors are unanimous in condemning this site. They pointed out that it was a depression with a very thin layer of soil and the decomposition of animal matter was abnormally slow. It should be removed”.

The original city fathers wanted the place moved. Shortly after the swampy conditions induced a plague breakout out in 1901, colonial medical officer Dr. W.H. MacDonald worried that the city was in the wrong place. In May 1903 Dr. Moffat, principal medical officer of the East Africa and Uganda Protectorate, called Nairobi dangerous and defective. After another plague in 1904, he recommended relocating residents to modern-day Kikuyu Township. But Moffat left in April 1904, and his successors held the costs of relocation too high.

On 18 May 1906, Sir James Sadler, commissioner for the Protectorate, wrote to Churchill, Undersecretary of State for the Colonies, complaining about the emergence of Kenya’s capital: “…at the commencement of the 1902 plague…the then-commissioner, Sir Charles Elliot, was strongly of the opinion that the site, which had been selected three years before by the manager of the Uganda Railway without consulting medical or sanitary authorities, was, with its inadequate drainage, unsuitable for a large and growing population. [It is a] depression with a very thin layer of soil or rock. The soil was water-logged during the greater part of the year.”

Churchill was reminded that four years previously, it had been recommended that the town be moved “to some point on the hills.” But railway engineers did not see Nairobi as becoming anything more than an Indian township—which, they argued, could “prosper in spite of unsanitary conditions and chronic plague.”

Sadler told Churchill this was a critical point in Nairobi’s history; that his predecessor had said: “…when the rainy season commenced, the whole town is practically transformed into a swamp.” But the Board decided instead only to try to drain the swampy bazaar area.

Nairobi continued to develop quickly and Sadler finally threw in the towel: “It is, I admit, too late to consider the question of moving the town from the plains to the higher position along the line some miles to the north. We had a chance in 1902, and I think it was a pity that we did not do so then as advocated by Sir Charles Elliot.” But even Sadler did not anticipate the growth, saying Nairobi would never become “a city like Johannesburg or a large commercial centre, for if there is a rapid development of industries or minerals in any of the new districts, the centres would spring up around them.”

Churchill accepted this idea and made the final decision: “It is now too late to change, and thus lack of foresight and of a comprehensive view leaves its permanent imprint upon the countenance of a new country.”

By the time the Nairobi Sanitary Commission was appointed in 1913, to enquire and report upon the sanitation and drainage of the township, the town had taken shape. It was now left to the engineers to build a city with the challenges that soggy ground presented. Many years later, failure to consult experts could make many buildings in the city uninhabitable in a few years’ time – or we look for ways to manage mother nature.

He who sings scares away his woes

Who is Auma Obama? Interesting facts about Obama’s half sister

Uncertainty over voter registration in US