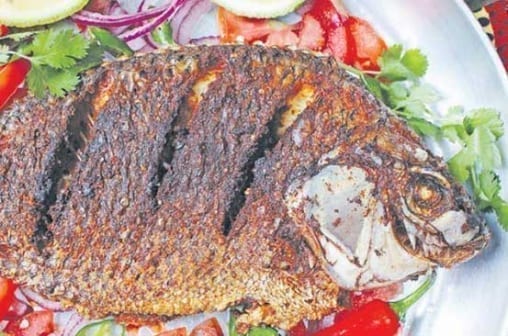 A spot check by The Standard confirmed that fish from China has flooded the market.

Nationally, Turkana has a new market in Nyanza for its dried and smoked fish which is trucked into Kisumu.

Fish processing companies in Kisumu have scaled down their operations due to lack of fish from Lake Victoria and are instead importing the commodity from China.

East African Sea Food Limited (EASF), which also processes Nile perch (from Lake Victoria) for export to the European Union markets, has been importing tilapia from China for the Kisumu market for the last three months to address the reported deficit.

The Standard bought a carton of fish at the Kisumu go-down for Sh2,000. One 10kg carton carries 60 pieces of tilapia, each weighing between 200-300 grammes. This means a piece of the imported tilapia goes for Sh30 in the market. This is cheaper than the local tilapia which cost between Sh100 and Sh200.

Kenyan Passport Is 8th Most Powerful In Africa and 72nd…

When we visited the company premises on Sabuni Road, a big crowd of buyers was waiting to purchase the fish which is sold in cartons.

A source at EASF who spoke confidentially said that the company’s decision to start importing tilapia was informed by the growing demand for tilapia against a decline in fish catch in the lake.

“It is the businessmen who were finding it hard getting the fish right here who requested us to import on their behalf,” the source said.

The company serves both retailers and individual buyers.

“We are doing a clean business. We are paying taxes and following rules,” the source added but declined to disclose the quantity of fish that they bring to Kisumu from China.

The imported fish is also sold in huge volumes at the Kisumu’s retail fish market.

While the tilapia from Lake Victoria comes in huge baskets, the ones from China are brought in cartons.

Men in faded overalls remove the scales, dissect and wash the fish before taking them inside the market for display on the numerous concrete slabs there.

Dickson Onyango, a broker in the imported tilapia business, gets between Sh300 and Sh600 per carton of the fish by just ferrying it from the factory to the fish market which is adjacent to Kisumu Bus Park.

“Those who buy from me still sell it at a profit, so it is not bad business after all,” he adds.

Celine Adhiambo, 35, who started selling tilapia in Kisumu in 2002 was too waiting to get the imported fish from the factory’s cold rooms.

“The prices of tilapia from the lake keep going up yet we also have to sell at a profit,” she told The Standard when asked why prefers the imported fish.

Ms Adhiambo says that in 2002 there was so much fish from Lake Victoria that they would throw the surplus away.

“It is true that there was a lot of fish in the lake at the time and the fish business in Kisumu was good and reliable. However, starting 2014 there has been a decline in fish catches,” she said.

Adhiambo also noted that the population of Kisumu residents has also shot up.

She told The Standard that some traders also sell the imported fish outside Kisumu.

“Not everyone who takes fish from here sell them in Kisumu. There are traders who take them as far as Busia,” said Adhiambo, adding that the Chinese tilapia, though smaller, is more delicious.

Robert Wanyama, the Director of State Department of Fisheries (Kisumu), said that the reason why there are tilapia imports into Kenya with Kisumu as the main market is because the demand for tilapia is high, yet Lake Victoria cannot sustain it.

“I am aware that East African Sea Food is importing tilapia fish from China which is sold in Kisumu, but what that means is that we have a growing demand that the lake cannot satisfy,” he said.

“There is need for people to embrace fish farming now that the lake is not yielding enough,” said Wanyama.

Fishermen from Lake Turkana have also been cashing in on the opportunities created by shortage of dried and smoked fish in the Nyanza market.

“There is a serious shortage of dried fish in the market because all the fish caught in Lake Victoria are sold fresh because of the high demand,” says Fred Ouko, a fisheries expert.

He added: “The opening of more hotels in Kisumu and other neighbouring towns has increased the demand for fish. This is why local residents living along the lake cannot afford the fish because prices are very high.”