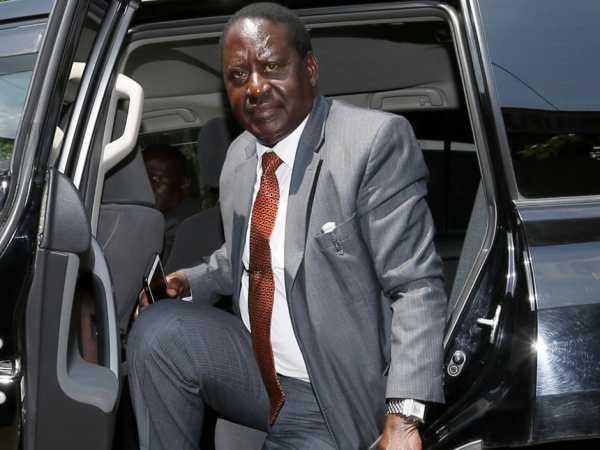 Cord leader Raila Odinga will make a fourth stab at the presidency — and all options are open.

Speculation has swirled about his intentions. He could run as ODM flagbearer, the Cord candidate or head of new super alliance.

Although Raila has not officially declared his candidature, close allies, including Suna East MP Junet Mohammed, have made it clear Raila will be on the ballot next year.

He has been seeking out Amani National Congress coalition leader Musalia Mudavadi and there’s talk of cooperation and an alliance.

But the former Prime Minister’s main objective now is to fortify, broaden and revamp his ODM party.

This time around, the opposition leader is leaving nothing to chance as he prepares to run again.

“His options are wide open. First we want to strengthen ODM party. Then we can negotiate with anyone, including President Uhuru Kenyatta,” ODM chairman John Mbadi said yesterday.

After successfully getting rid of the Independent Electoral and Boundaries Commission members, whom he accused of bias in favour of the ruling Jubilee alliance, Raila is focussed on rebuilding ODM as he explores various options.

“The political landscape will change dramatically as we head to 2017. What you see today may not be the case because I can tell you for sure Raila and his close allies are scheming to be in government,” a close aide said.

Raila was the Cord presidential candidate in the last election and his two co-principals, Wiper’s Kalonzo Musyoka and Ford Kenya’s Moses Wetang’ula also want to be the Cord flagbearer.

The former Prime Minister’s handlers previously told the Star that Raila has at least five options: Keep the coalition intact and run for President; relinquish his fourth run for the presidency, act the elder statesman and back another candidate; form a new coalition and run for President as its head; go it alone as ODM chief, aiming to become either leader of the majority or minority in Parliament. That would give him bargaining power in government. The last option is to finally hang up his boots and quit politics.

“Cord is the only option. The co-principals have an internal agreement to strengthen affiliate parties and broaden the coalition framework with the possibility of forming a super alliance,” Magaya said.

Raila is fresh from touring parts of the Coast where he met ODM leaders and urged residents to renew their membership in his party.

This weekend he will head to Turkana for a meeting with the county ODM chiefs before attending the Turkana Cultural Festival.

will head to vote-rich Kakamega county where he will meet grassroots ODM leaders and assure them that he is strong, his appeal is broad and he is not too old to run again. Raila is 71.

“ODM, which is the single largest party in the country, offers the best chance for the Luhya community to ascend to power. Our best bet as a community is to stay in ODM and position ourselves to use it” as a ladder.
“Kenya is big, divided and complex. We will navigate it using a large party that has learnt the art of navigation, not through a party struggling in one or two counties. Our community will follow an arrangement that enhances its chances and uplifts rather than diminishes the stature of its leaders,” Oparanya said.

Raila is unique in having run for President on three occasions, representing three different parties. A populist in style, he is a keen Arsenal fan and is known to rouse political rallies using football analogies.

“He has started identifying team members in his key strongholds. Once the ODM party nominates him as the presidential candidate, Raila will then pick his final team to take on Kenyatta,” a senior aide said.

Insiders say Raila wants to craft his campaign to resemble the 2002 Narc machine that brought President Mwai Kibaki to power by creating a “summit” uniting key party and regional leaders.

The unity of purpose at that time saw the opposition trounce Kanu’s Uhuru Kenyatta, despite the powerful Moi state machine supporting him.

Raila hopes to further strength his ODM party by holding grassroots elections in places where party positions are vacant.