Charity Ngilu Hints That She Could Work With CORD 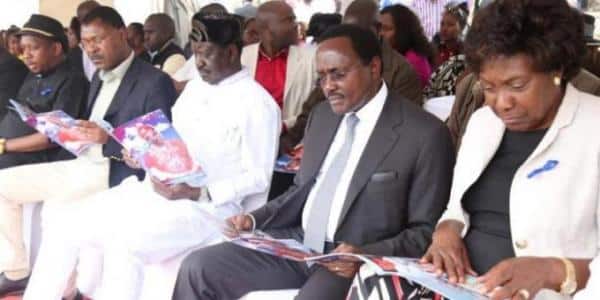 While addressing the mourners, Ngilu urged the three CORD principals Raila Odinga, Kalonzo Musyoka andMoses Wetangula, who were in attendance, to consider adding more women in their alliance.

“Odinga, Kalonzo and Wetangula… add more women to CORD because it’s the missing link… I only see three men in this alliance all the time. Where are the women?” Ngilu posed.

The former Lands Cabinet Secretary stated that there were women from the area who could make the Opposition strong including herself (Ngilu).

Raila, who stood to address the mourners, seemed to confirm that Ngilu could be joining them after he announced that she was on her way to CORD.

“You see Ngilu is on her way. And many more others will join us,” Odinga stated.

The Opposition leader also quelled rumours that CORD was about to split, terming the speculations as propaganda being spread by media.

“CORD is intact. It is the media that is wishing for discord and a split between us. They should stop speculating over non-existent differences,” Raila affirmed.

Kalonzo promised Ngilu that the Opposition will ensure women get equal representation ahead of the upcoming General Election.

“We know where we want to take the country. We are going to that direction and nothing will stop us,” the Wiper leader stated.

The leaders had attended the burial  of Dolamu Henry Oduwole, the Nigerian husband to former Kathiani Member of Parliament (MP) Wavinya Ndeti, who died on September 25 after a short illness.