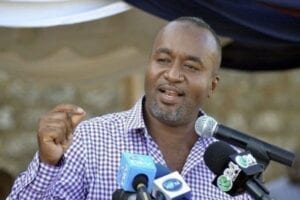 Speaking during a rally in Kisumu, Kilifi Woman Representative Aisha Jumwa, and Mbita MP Millie Odhiambo stated that his hard work for the party showed his commitment to Odinga.

Joho on his part indicated that he was ready to work hard to ensure the CORD leader clinches the presidency in 2017.

“The party met in Mombasa and we decided that our presidential candidate in ODM is Raila Amollo Odinga and we will work tirelessly day and night to ensure that he is on the ballot paper in 2017,” he said.

During the party’s 10th year celebration, Odinga praised him and went further to state that there were no problems in the CORD coalition.

“We will weigh ourselves against each other in a friendly competition where there is no jealousy or hate. We are all friends. But first for us we have to start by making our party ODM stronger,” he said.

According to Musyoka, this would not mean the dissolution of affiliate parties but would reduce fallouts.

The Wiper leader on Saturday kicked off a road show in Mombasa ahead of a major rally for Sunday where the party was expected make a declaration over its position on the Cord’s presidential flag bearer.

During the rally, Wiper is also set to express its views over the nomination process to be used by the coalition.

Wiper Secretary General Hassan Omar stated that the party has mobilised its supporters for the tour and expected a major crowd during the rally.

Police allowed Musyoka to hold the rally at Tononoka grounds.

The Word Of God Seminar In Silver Spring Maryland

Video:Sad Story of Jane Mwangi,Shot and Paralysed by a Robber