VIDEO:Man shot dead outside US embassy in Nairobi

A suspected Al-Shabaab terrorist was on Thursday shot dead after he stabbed a General Service Unit (GSU) officer at the heavily guarded US Embassy in Gigiri, Nairobi.

“The US Embassy confirms there was a shooting incident near the Embassy. No Embassy personnel were involved. We refer you to Kenyan authorities for further details,” said a statement from the embassy.

The suspect, it is reported, was trying to forcibly gain entry into the embassy when he was blocked by the Kenyan officer at the gate.

The attacker stabbed the GSU officer on the head and right hand before the officer gunned him down. 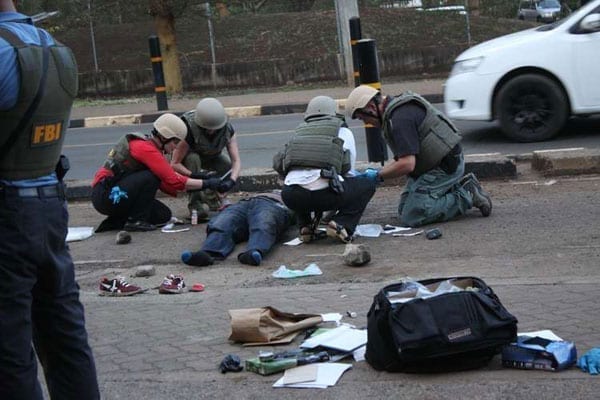 FBI detectives at the scene where a man was killed on October 27, 2016 after attempting to attack a GSU officer on duty at the US embassy in Nairobi. PHOTO | ANTHONY OMUYA | NATION MEDIA GROUP

Dressed in a dark blue jeans and grey sweat-shirt, he pretended to be passing by the Visa section gate when he attacked the officer.

Gigiri OCPD Vitalis Otieno said the suspect hails from Wajir County but could not give his name.

An eye witness said he saw the man attack the officer to ground and that the officer, however, managed to shoot and kill his attacker.

Investigations into the incident were taken over by five detectives from the Federal Bureau of Investigations (FBI) who collected samples and exhibits, including his blood samples.

Detectives said the suspect had no mobile phone but had a Safaricom SIM card in his pocket. 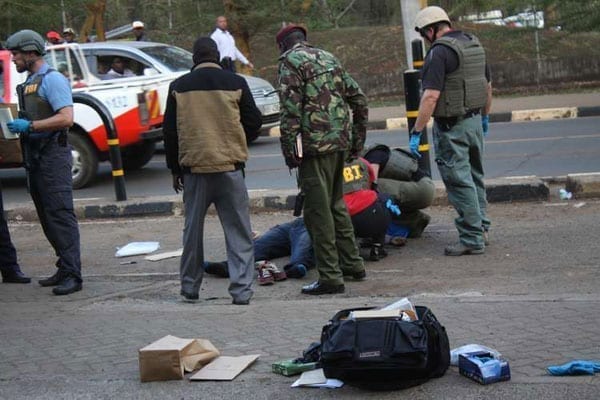 Security officers including the Kenyan officers and FBI detectives search the body of a man gunned down outside the US embassy on October 27, 2016. PHOTO | ANTHONY OMUYA | NATION MEDIA GROUP

Documents found on him indicated that he had reported three cases at the Pangani police station but the OCPD did not give the details.

Security has been beefed up within Gigiri in the last one year following terror threats. Last month, Education Cabinet Secretary Fred Matiang’i directed the Kenya Technical Trainers College to be relocated to the former Kenya Science College along Ngong Road in a move seen as having been prompted by the security concerns.

Detectives are yet to establish the motive of the suspect who wanted to disarm the officer.

A senior police officer said he could be a lone-wolf terrorist, who commits violent acts alone, outside of any command structure and without material assistance from any group.