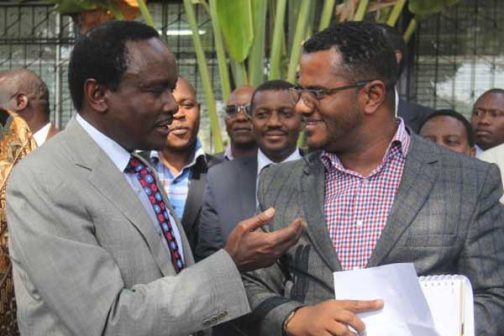 Wiper leader Kalonzo Musyoka on Friday declared that he would stick with Raila Odinga till the end and will work with him to secure victory in the August poll. With talk rife that he was seeking to bolt out of the National Super Alliance (NASA)  which has brought him together with Raila, Musalia Mudavadi of  Amani Notational Congress (ANC) and Ford Kenya’s Moses Wetang’ula,  the Wiper leader said the opposition leaders were bound together by a common ideology.

Speaking after Wiper’s National Executive Council meeting yesterday, Kalonzo said NASA was held by a common desire to promote cohesion, peace and economic prosperity and replace the  Jubilee administration which he described as corrupt. “We have fought corruption, bad governance and tribalism that has been entrenched in the Jubilee administration while in the opposition. We have witnessed the country’s journey to prosperity and harmony clawed back in a single term and we will not allow that to continue,” said Kalonzo.

Describing NASA’s desire to   strengthen devolution and ensured there was equitable development across all counties, Kalonzo said President Uhuru Kenyatta and  his deputy William Ruto had lost the support  of Kenyans.  Political dealings

“These are issues that have held us together as the Opposition and it will be foolhardy for anyone to think that we can break up just a few months before election, especially when victory awaits us,” said Kalonzo. In a candid interview with The Standard on Saturday, Kalonzo said he was pushing to secure the NASA nomination with the backing of   Raila, Mudavadi and    Wetang’ula.   “I am hoping that my colleagues at NASA will back by quest for a  ticket to trounce Uhuru. I have never felt this confident about an election. Jubilee is aware that I stand an enormous chance of beating them if I am the flag bearer,” said Kalonzo after chairing his party’s national executive council meeting. The Wiper leader spoke in a week of heightened political activity amid claims that he was preparing to go it alone or work with Jubilee if he is not elected the NASA flagbearer. Kalonzo is the most dominant leader from the expansive Kamba region, one of the blocs that could sway the August elections. However, calls of tensions within NASA have been dismissed by other party leaders. Wiper Secretary General Omar Hassan said much of this talk has been engineered by their rivals to undermine NASA. “We are more united as a party and our interest is to have our party leader fly the NASA flag as the presidential candidate for the united opposition,” said Omar, sentiments supported by Kalonzo.

“The ruling coalition is very determined to break us,”   said Kalonzo. He said his plea for support from NASA partners  in his bid for the presidency should not be construed to mean that he is breaking away from the group. Kalonzo has continued to solidify his support base and has planned a four-day tour of the Coast region that will see him visit Mombasa, Kilifi, Taita Taveta and Kwale counties to drum up support for IEBC’s mass voter listing  exercise that is now winding up. On Thursday, he welcomed to Wiper Muungano Party leader and Makueni Governor Kivutha Kibwana in what was seen as a serious effort to put under lock and key his Ukambani political base. “I am also urging my sister Charity Ngilu (Former Lands minister and Narc leader) and Wavinya Ndeti (Chama Cha Uzalendo leader) to come join us so that we can move together,” said Kalonzo. Kibwana’s transfer to Wiper has given Kalonzo the impetus to soldier on to the coastal counties that neighbour his region and have a big presence of  members of the Kamba community. Leaders from Kalonzo’s Ukambani backyard have spoken out in support of his candidacy and dismissed claims that he would decamp from NASA. Speaking after the Wiper NEC meeting, Machakos Senator Johnstone Muthama accused the  National Intelligence Service (NIS) of fuelling  rumours of Kalonzo’s planned exit from NASA   to alienate him.

“We are fully aware of NIS’s attempts to break the alliance by trying to fragment the opposition. They know that Kalonzo stands strong chance with  a political base of over 2.5 million voters. This will determine who wins the next polls,” said Muthama. “If any of the four top politicians in NASA bolt out, where will they be going? They have nowhere to go”? posed Muthama.
Source link-standardmedia.co.ke