A NASA rally in Wajir was marred with controversy after the area governor was accused of forcing people to attend – The governor was reportedly warned of plans to boycott the rally and chose to have his office staff bring their family members to the rally – Raila, Kalonzo, Mudavadi and Hassan Joho were expected to be in Wajir on Saturday April 1, to hold a rally Wajir Governor Ahmed Abdullilahi reportedly forced county government workers to show up for the NASA rally with 20 members of their families. 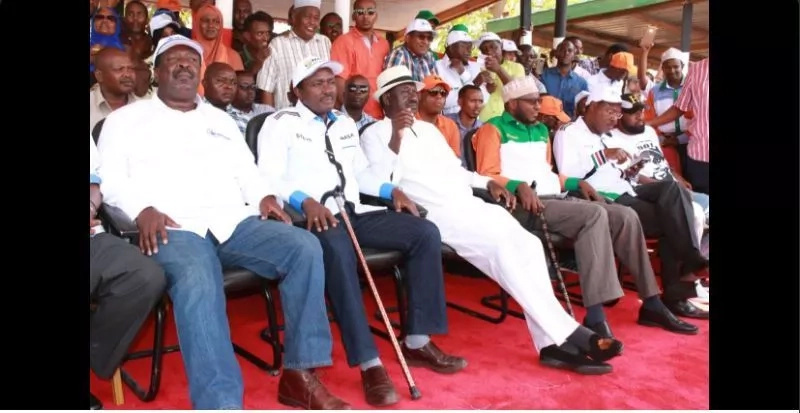 The action was motivated by the fear that the rally would be a fail after the area leaders defected to Jubilee party. TUKO.co.ke has been duly informed that all the workers who would ignore the memo sent through chiefs would face unspecified disciplinary action or lose their job.

Wajir residents waiting for the NASA rally to commence

Raila and Ruto exchange BITTER words despite being in…

Two months ago, it emerged that the governor had instructed the Wajir County government employees to welcome him in the county after arriving from Saudi Arabia. All the contractors in the county were also reportedly told to endorse him after the Degodia clan shifted support to Mohamed Abdi for the gubernatorial seat.

Wajir has 5 ODM MPs, an ODM nominated senator and a senator elected on ODM. Its on record that the 2 senators and 4 other MPs defected to the ruling party, Jubilee.

There is a growing worry in ODM that Jubilee will triumph in the area since the MP’s who defected have a large following in the region.

Inspiration:Be careful how you live.

Nairobi Pastor: Raped, stabbed and left for dead on my wedding day