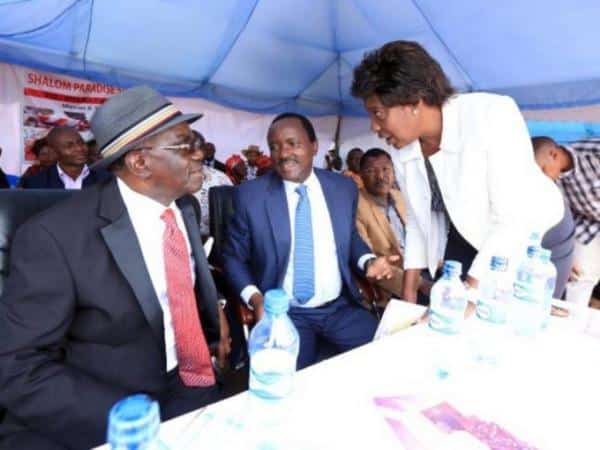 Wiper leader Kalonzo Musyoka was booed on Saturday at Migwani during the burial of Kitui Senator David Musila’s mother.

This was when he sought to defend himself against the allegations that he interfered with the April 24 governor nominations.

He is accused of having aided the incumbent Julius Malombe to rig the primaries which the senator’s supporters believe were a sham.

“I am always an honest and transparent person. I’m stating clearly that I wasn’t involved,” Kalonzo said, a comment that angered the mourners.

As he was being booed, the NASA presidential running mate said there is nothing which can separate him from Musila.

“We have have a long history. When Musila resigned as Wiper chairman and ditched the party, I refused to reply to his letter.”

Musila will vie as an independent candidate during the August 8 poll.

“If he wins as Governor, well and good. But if he doesn’t, then he will have to come back and resume his seat in Wiper party as chairman,” Kalonzo said.

“You are some of the strongest pillars. As pioneers of Wiper, I can’t sit and watch the house cave in,” Mwendwa, who has since retired from active politics, said.

NASA co-principal Moses Wetangula, who had accompanied Kalonzo to the burial, said Musila has assured him he is still supporting NASA despite ditching Wiper.

He said NASA is determined to win the presidential seat since so as to redeem the country’s deteriorating economy.

The legislator said Jubilee administration is guided by greed and selfishness which makes them fail to notice what Kenyans want.

“Time has come when we must get good governance. When Kalonzo, Raila, and Kibaki worked together, the economy was good. What we are witnessing is pathetic.”

Muthama told Kalonzo to stop giving Kitui residents incompetent people adding that he cannot withstand when residents are being mistreated.

He added that Malombe rigged Musilas votes and should be disqualified from the August 8 polls.

Governor Malombe, who did not attend the burial, said the claim that the election was rigged in his favour was a lie.

You were ill-advised on govenor bid against Sonko, Isaac Mwaura tells Kenneth

US top court rules immigrants can be held indefinitely