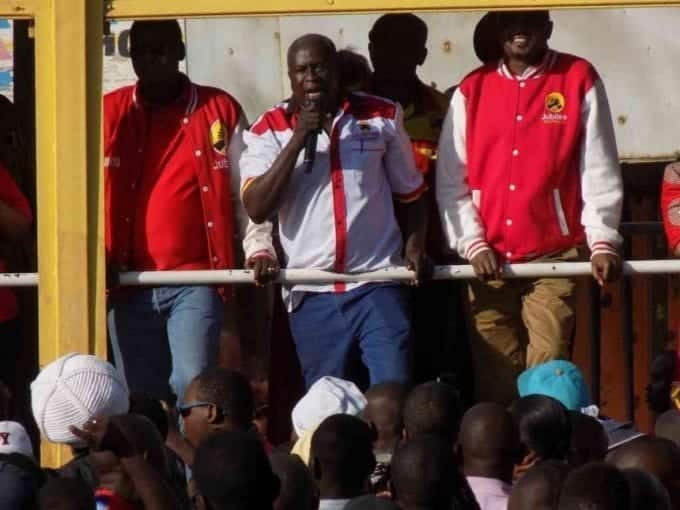 Jubilee politicians rebuked Machakos residents after they were booed during a rally in Athi River town on Monday.

The politicians told a charged crowed that it is their constitutional right to traverse all 47 counties campaigning for the ruling Jubilee Party.

They noted they will drum up support for President Uhuru Kenyatta and DP William Ruto’s re-election, and for any other Jubilee candidates ahead of the election on August 8.

“There is no Gor Mahia match here. IEBC gave me permission to come and campaign here today. Let us respect one another,” Ndile said.

“The person who sent you to throw stones at us will be position five and I will get to Parliament as Mavoko MP on August 8.”

The crowd kept shouting and chanting Wiper and NASA slogans whenever the leaders mentioned ‘Jubilee’.

“Mwenye anataka kunipiga na mawe aje hapa anipige. Nimerushiwa mawe na kutukanwa lakini sijali. Mtapiga makelele mpaka zile pesa mmelipwa ziishe (Whoever wants to hit me with a stone should come closer and do it. Stones have been thrown at me before…I don’t care. You will only make noise until you finish using the money you were given),” said Kimunya.

But Mwaura said the residents had the constitutional right to support the Opposition’s NASA coalition.

“I was also there but left for Jubilee Party because of riddles. This is democracy,” he said and campaigned for Ndile

Kuria scolded the residents for responding to his greetings by shouting NASA.

This loosely translates to: “How can you say NASA after I say ‘museo‘? I rebuke you…go away…The money you were given is too little for that job. You go to bed hungry…you are given Sh15 to make noise and still go to bed hungry…go away.”

The politicians blamed their ordeal on NASA leaders in the region.

Ndile said the act of hooliganism leaders who sponsored the crowd lacked policies on which to base their campaigns. The crowd shouted ‘NASA’ and ‘Unga‘, drowning the voices of Kimunya and others who tried to address them.

Some of the leaders pleaded with the people to stop shouting during their meeting in Kalundu.

After her address was disrupted, Mwinzi asked Opposition supporters to show respect as they gatecrashed a Jubilee Party meeting.

“Let us have order. We should have respect because, after all, this is a Jubilee meeting,” she said.

Kimunya said: “Unga will be availed bountifully and it will be sold at the affordable price of Sh90 per packet.”

A maize shortage resulted in the scarcity of maize flour and higher prices at supermarkets. The government intervened by increasing imports and offering subsidised GOK flour at a cost of Sh90 per 2k pack.

Kimunya urged Kitui residents to re-elect Uhuru and Ruto, saying this was the surest way to improve their lives.

He said they deserve another five years in office as they have performed well.

Sakaja, who is Nairobi Senator candidate, said Jubilee MPs have a soft spot for Kalonzo as they agreed to ratify his son Kennedy Musyoka as a member of the East African Legislative Assembly.

He said since Kalonzo is not running for president, Kitui residents should choose Uhuru over NASA presidential candidate Raila Odinga.

“It would be foolhardy for you to vote for Raila as he will lose to Uhuru. You should join us as we form the next government.”

He said Sonko will be the most powerful person after the President and DP.

(VIDEO) Alfred Keter and 2 others deny fraud charges in Nairobi