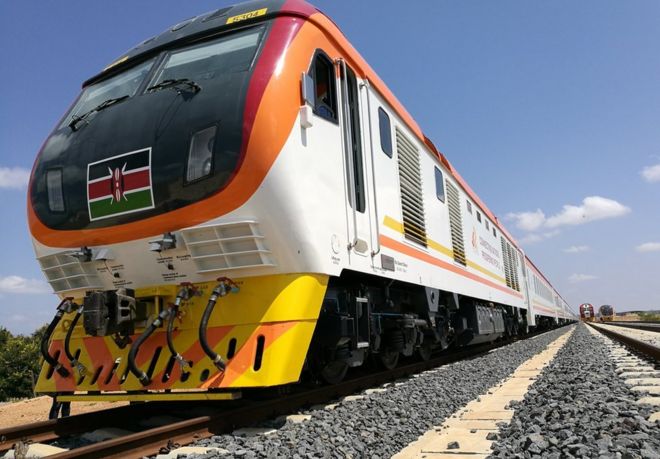 The first major new railway line in Kenya for more than a century, running between the capital Nairobi and the coastal city of Mombasa, faces an immediate challenge of justifying its relatively high cost.

At $5.6m per kilometre for the track alone, Kenya’s line cost close to three times the international standard and four times the original estimate.

So it is perhaps not surprising that Kenyans have been asking why they seem to have paid so much.

Kenya’s new 472km (293 mile) railway is the country’s biggest infrastructure investment since its independence in 1963. Built to a modern “standard gauge”, it runs parallel to the now-dilapidated metre gauge railway line from the colonial era.

Cost comparisons have been made between this line and Ethiopia’s 756km Addis Ababa-Djibouti line launched last year.

Both are Standard Gauge Railway (SGR) projects financed by Chinese loans, costing $3.4bn (£2.6bn) for Ethiopia and $3.2bn for Kenya.

Ethiopia’s line is more than 250km longer and is electrified, which is typically more expensive; trains running on Kenya’s line will be diesel-powered.

The Kenyan government has said the reasons for this high cost include the terrain that required many bridges and tunnels, land compensation and a need for specifications that would handle greater cargo volumes than Ethiopia’s line.

Therefore, it says, the two projects are not directly comparable.

About 80% of the money for the new railway came through loans from China.

The loans are the country’s biggest yet – amounting to roughly 6% of Kenya’s gross domestic product (GDP), which is a measure of a country’s economic activity, including all the services and goods produced in a year.

It concluded that the benefit of building a new standard gauge railway would be marginal. It was considered “cost prohibitive” using “even the most optimistic” traffic and income projections, it said.

But Transport Minister James Macharia has said the Kenyan government expects the new line to boost GDP by 1.5%, allowing the Chinese loans to be paid back “in about four years”.

That projection runs counter to recent fears that Kenya may soon become unable to pay the large amounts owing on existing loans.

Heavy borrowing has seen public debt rise to more than half of GDP in the last four years, yet there has been no corresponding growth in revenue.

Most of the railway’s revenue is expected to come from transporting cargo. Only 5% of cargo is currently being transported on the old railway line while 95% goes by road, but Kenya Railways is aiming to push its share to 40% by 2025 with the new track.

It is possible that a law will be passed requiring certain goods to be transported by rail to ensure a massive transfer of freight away from the roads.

Kenya’s new railway at a glance:

The new railway also faces a regional contest. Tanzania and Kenya compete to serve the transit trade of landlocked Uganda, Rwanda and Burundi.

A 2013 World Bank study predicted that freight traffic on the entire East Africa Community rail network would grow to approximately 14.4 million tonnes per year by 2030.

The same study found that investment in a standard gauge railway appeared “only to be justified if the new infrastructure could attract additional rail freight in the order of 20-55 million tonnes per year”.

By that measure, the railway would need to win all of the freight currently trucked to and from Mombasa – and more. According to the Kenya Ports Authority, Mombasa port handled a total of just over 26 million tonnes of cargo in 2015.

Despite these challenges, the new railway will undoubtedly bring several long-term economic benefits.

Passengers will enjoy a faster, cheaper journey and the increased freight-carrying capacity reduces wear and tear on the roads.

Freight costs per kilometre in the region are more than 50% higher than in the United States and Europe, so a more affordable rail option is a relief for businesses.

Jobs have been created directly from the construction and maintenance of the SGR, and more opportunities could come as towns and businesses grow along the railway line.

Kenya is the largest exporter and importer in East Africa, and the new railway is a critical part of the plan to connect neighbouring states by rail, making it easier to trade with each other and the rest of the world.

There is no doubt that the project is a gleaming symbol of progress, but now it is up to the volume of business it can attract to prove that it was worth the cost.