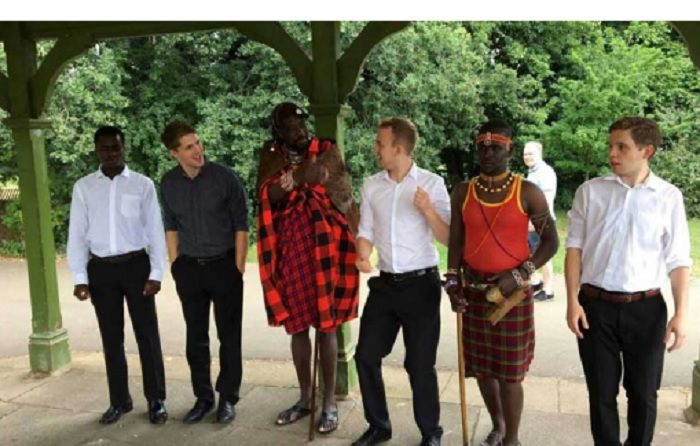 There is a music video that has gone viral. The video has three youthful white men and two men of Kenyan origin, dropping soothing ballads in various local dialects. In one of the songs, the white men are dropping the lyrics in such flawless Dholuo, intonation and all it can make a native Luo jealous. Meet the Halaiki Band, the new group that is causing ripples on the Internet. Halaiki band was formed three years ago after members of Kenyan Boys Choir and the UK-based Chasing Deer music group teamed up to pursue a noble mission — market Kenya as a tourist destination.

The band has ten members — five singers, three videographers, a voice coach and student volunteer from the UK. Of the five singers three are members of the Kenya Boys Choir. They are Sabore Oyie, Ekalale Lokitela and Charles Odhiambo. The Britons are the Chasing Deer band leader, Rob Hodkinson, Adam Biddlecombe and Peter Hyams. “We do 15 hours a day. We love music and we enjoy writing and playing music from all over the world. We thought of doing something different for both the young and the old. Everywhere we go, we have been received so well,” Hodkinson says.

Halaiki recently partnered with Kenya Tourism Board (KTB) to take their message of marketing even further- to universities in the UK. “We are now officially Kenyan traditional cultural ambassadors who tour the world and promote Kenya through talks and traditional music,” the team leader says. On Wednesday, the group was unveiled at the Kenya High Commission in the UK by Commissioner Lazarus Amayo. Also present was the group’s director Diana Badia, the brainchild of the whole idea. “Our target is to win over many students from all the colleges and universities in the UK who choose Kenya as a tourist destination. These young people offer many possibilities for us,” she says. The band has so far visited close to 30 venues in the UK with the theme ‘How well do you know Kenya?’ Badia most of the young UK residents they met during their tours are keen to travel to Kenya. “They want to see the historical and memorial sites. They also want to volunteer their services in Kenya,” she says. The band is on a tour that they will wind up next month, and so far, the journey has been enthralling.

“It has been an incredible journey to find new ways to market Kenya and our biggest factor of success is the working relationship we have established with KTB,” says Badia. To capture the audiences’ imagination, the band heavily borrows from African culture. The group wear Maa regalia, use the Turkana seat, stick and songs and play orutu, a single-stringed Luo musical instrument. “We love music and we enjoy writing and playing music from all over the world. We perform music from all over the world. We thought of doing something different for both the young and the old,” says Hodkinson. Hodkinson says the unique blend of Kenyan and English music, with the new instruments, lyrics, dances, moves is a fresh and different blend that makes audiences ecstatic. “In London it has been awesome. There are places we have performed and the crowd gets so excited people dismount from their bicycles to dance. Music has no boundaries,” says the band leader.
–standardmedia.co.ke