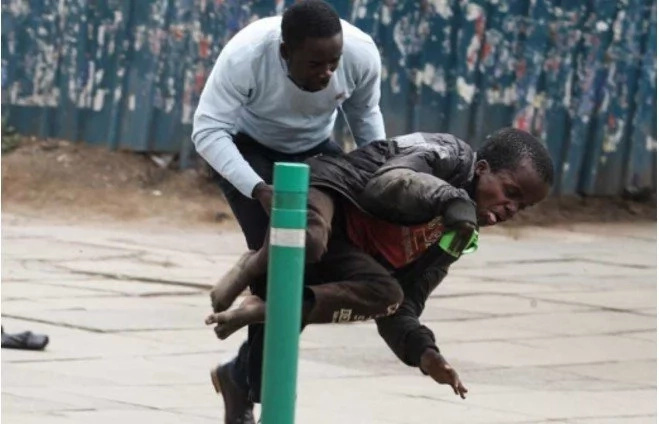 A Kenyan journalist is still receiving heaps of praises following his heroic act outside the Supreme Court on Wednesday,September 20 2017,during the landmark presidential poll petition ruling.

Victor Muyakane, a journalist who works for KBC has become an instant online sensation after he was captured rescuing a disabled man on a wheel chair from a swarm of stinging bees.

As reported by TUKO.co.ke earlier,there was drama and chaos outside the Supreme Court after bees attacked protesters, journalists and police.

Well,as everyone was fleeing for dear life after the agitated insects descended on them,Muyakane took it upon himself to rescue a helpless disabled man.

In photos that have fast gone viral,Muyakane is seen carrying the disabled man and fleeing from the area where the bees had invaded.

The journalist’s act of bravery has been lauded by Kenyans from all walks of lives including fellow scribes,and even politicians.

TUKO.co.ke has learnt that the disabled man suffered serious injuries from the bees’ stings,but was rushed to hospital by St Johns Ambulance Rescue Team.