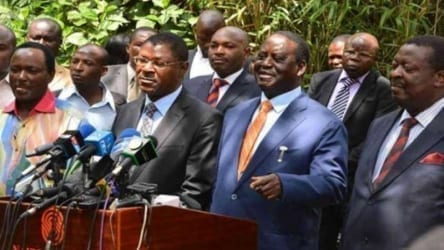 A Member of Parliament (MP) allied to the Jubilee Party has slammed Opposition leader, Raila Odinga, for staging countrywide protests against proposed amendments to the Election Laws.

Speaking in the National Assembly on Thursday, Tiaty MP William kassait criticised Raila indicating that he is a retiree who does not want to step down peacefully.

Kassait added that the National Super Alliance will break soon, alleging that Kalonzo Musyoka and Musalia Mudavadi will decamp soon.

“Raila is one tired and notorious retiree who does not want to go home quietly. But I am happy madam speaker to say that indeed in the next three days this animal called NASA will crumble. NASA Co-principal Kalonzo Musyoka is on his way to Jubilee,” Kassait alluded.

“Musalia Mudavadi, I am also informed, is on his way to KANU where he belongs and very soon the Raila will be left alone to retire in peace and grace,” the legislator added.

The MP exuded confidence that the former Prime Minister will lose to President Uhuru Kenyatta in the fresh poll slated for October 26.

Raila announced that there would be peaceful demonstrations on Mondays and Fridays to stop the amendments of the electoral laws spearheaded by Jubilee MPs.

The Opposition chief accused Jubilee of attempting to alter the electoral laws to ‘reverse democratic gains.’

“We have no other option but to take the battle to the people because the sovereignty lies with the people of Kenya,” stated Raila.

He spoke during a press conference at the Wiper Party headquarters in Nairobi.