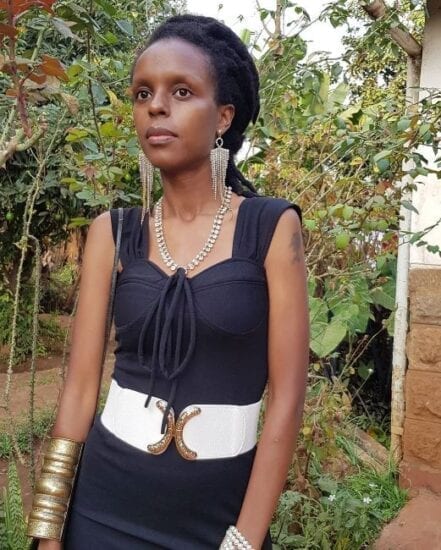 At one moment you are at the top…then all this happened, media personality laments about chronic disease. Njambi Koikai has gone through tough times in the last two years.

They say when it rains, it pours.

And in Njambi’s case, it seems to have been an El Nino season.

As if the diagnoses were not bad enough, she was on the retrenchment list and lost her media job just as she was about to celebrate 10 years in the industry as a reggae radio presenter.

“At one moment you are at the top — I was on radio and TV — and my career was going well, then all this happened and there was a point I was asking God, why me?”

Njambi, or Jahmby, as she is fondly referred to by her fans, has struggled to foot the bills that come along with endometriosis treatment.

After losing her job, she had to look for a health insurance policy to try and ease the financial burden that came with endometriosis, but it proved an uphill task.

This is because, as with many pre-existing conditions, insurance companies avoid covering people who have them as they are considered high-risk individuals. Worse still, little is known and understood about endometriosis, furthering the reluctance to cover the condition.

Seeing what her grandmother went through as well as what she has gone through seeking treatment, Njambi says the whole experience opened her eyes to the poor state of healthcare in the country.

Njambi has thoracic endometriosis. “The endometriosis lesions have moved to my lungs, which is a rare case,” she says.

Endometriosis is a medical condition whereby the lining of the uterus, known as the endometrium, grows in other places, such as the fallopian tubes, the intestines, the colon and, in rare cases, the lungs and the brain. When the endometrium lining breaks down, like the regular lining that causes menstruation breaks down, it has nowhere to go.

“In my case, this lining or cells are lodged in my diaphragm and lungs. Every month when I’m on my period, these cells bleed into my lungs, causing my lungs to collapse.”

Njambi believes she can find a lasting solution in the US, but she will need Sh10 million. She has started the #IStandWithNjambi drive to raise funds.

Njambi says she has located a specialist doctor able to remove the endometriosis cells from her lungs. The treatment includes two surgeries. “Endometriosis treatment is a problem on our continent because of the infrastructure required as well as medical training in endometriosis, which is not locally available.”

Njambi has faced rejection, but says she will not relent in spreading awareness about the condition that affects about 176 million women worldwide. Her simple message is, “period pain is not normal”.

“We have been made to think that period pain is normal, but it isn’t. Periods should never be painful. If they are, you need to get checked. Menstruation is nothing to be ashamed of. It’s a biological function that’s been stigmatised since our existence. The fact that women bleed every month displays the strength we inhibit.”

Endometriosis has made carrying out simple tasks difficult for Njambi. “I have severe pain during my periods that make me immobile and unable to carry out my daily duties. It is debilitating pain that causes nausea, diarrhoea, fatigue, extreme severe pelvic pain, heavy bleeding, anxiety and panic attacks, backache and headaches.”

The condition has drained Njambi not only financially, but physically. There was a point she lost so much weight, she weighed 38kg.

She says she was tired and felt like she had no more fight in her, but she had to keep moving.

Njambi says that there is the option of taking painkillers during periods, but the problem is that one becomes immune and has to progress to stronger pills. And the cycle continues.

Endometriosis has been associated with infertility.

Njambi says, “I know endometriosis is known to cause infertility. I have not tried to have a child yet, but I do want to have a family of my own some day, God willing.”

Njambi says she is grateful for the support she has received from her family, friends and fans. “The media has also supported me. Fundraising is not easy, but God works in miraculous ways.”

Njambi has lost out on many opportunities because of endometriosis. “I’ve been judged harshly and misunderstood. I’ve worked with so much pain. Our problem is normalising pain until it gets to such cases.”

She continues, “Like Steve Jobs says, a hospital bed is the most expensive bed. It’s a very excruciating experience when you have to be in and out of hospital every time. It’s depressing when you have to depend on others to even do the simplest of things for you. But I keep positive because of all the support around me. I also know that God is with me and this pain is not in vain, but to raise awareness on endometriosis and the pain that women are silently going through.”

Njambi hopes her story will raise awareness and make women realise that extreme period pain is not normal. “I want to see women being able to live painless lives. I also pray that the government will increase funding for endometriosis research and train our doctors to deal with this condition so that women can live to their full potential.”

Njambi closes by saying, “I’d like to encourage other women suffering this pain that they are not alone and we will get a cure. One day we will find a cure for this rejection and pain that we have continuously suffered for a simple biological function that is menstruation.”

HOW TO HELP NJAMBI