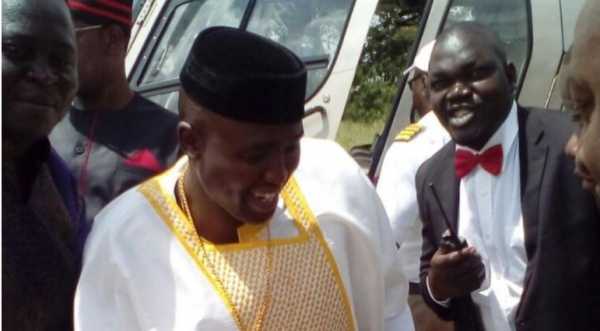 Remember Henry Waswa? The wealthy businessman who stunned the country in 2015 after Obama’s visit.

Henry shot to the limelight after his story of overcoming adversity to become one of the wealthiest tycoons in the country caught the attention of the nation. Waswa, who also attended the GES summit and made quite an impression on the youth gathered there, said that his greatest moment was getting to meet Obama up close, shaking his hand and benefiting from the wonderful advice that Obama gave him and a team of other Young Kenyan millionaires.

Well, after somewhat of a hiatus, the 31-Year-Old has rocked the country once again, especially the sleepy Nzatani village in Kitui county.

The flamboyant city businessman stunned Kitui Town last Saturday after he landed with four choppers to pay the bride price for his fiancee Moreen Tabitha.

The ceremony, estimated to have set him back some pocket change amounting to Sh 5 Million, was graced by youthful legislators including Babu Owino, Charles Nguna (Mwingi West), Caleb Amisi (Saboti) and Alfred Keter (Nandi Hills) who were there to help him negotiate for his wife. From an engagement ring worth Sh 1.6 Million to a fleet of high-end cars for the guests, the businessman with interests in the entertainment and real estate industries went all out for the ceremony.

All hotels and guest rooms in Kitui on the day he was in town were fully occupied by his guests. Waswa also threw whole night party for the villagers.

Details are scanty on how much bride price was paid, though the heavy presence of security could be a pointer that a handsome amount of money exchanged hands.

The lovebirds are said to have flown to an unknown destination outside the country for the main wedding.