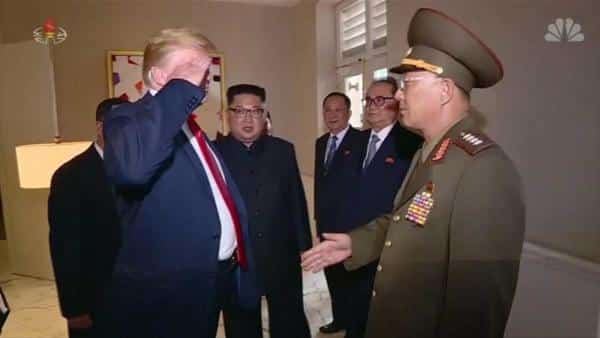 The odd moment was captured during Trump’s visit to Singapore for a summit with Kim this week, with North Korean state television broadcasting the footage Thursday.

In the interaction, Kim is seen introducing Trump to a North Korean general.

The US president puts out his hand for a shake, but the general instead salutes Trump.

In an awkward-seeming moment, Trump then briefly salutes the general.

The interaction prompted disbelief among some Trump critics, who already have said the president appeared too accommodating to Kim and his autocratic regime, which is accused of gross human rights violations.

“Kim Jong Un is pocketing immediate concessions and not making any concrete commitments. Nauseating to see Trump stiff our allies in Canada and then praise Kim while saluting his generals.”

“It’s a common courtesy. When a military official from another government salutes… you return that,” Sanders said.

Former president Barack Obama sparked outrage from his Republican opponents when in 2009 he bowed to Japanese Emperor Akihito.

Conservative also media blasted Obama when he bowed that year to Saudi King Abdullah, and he was assailed again in 2014 for saluting while holding a cup of coffee.