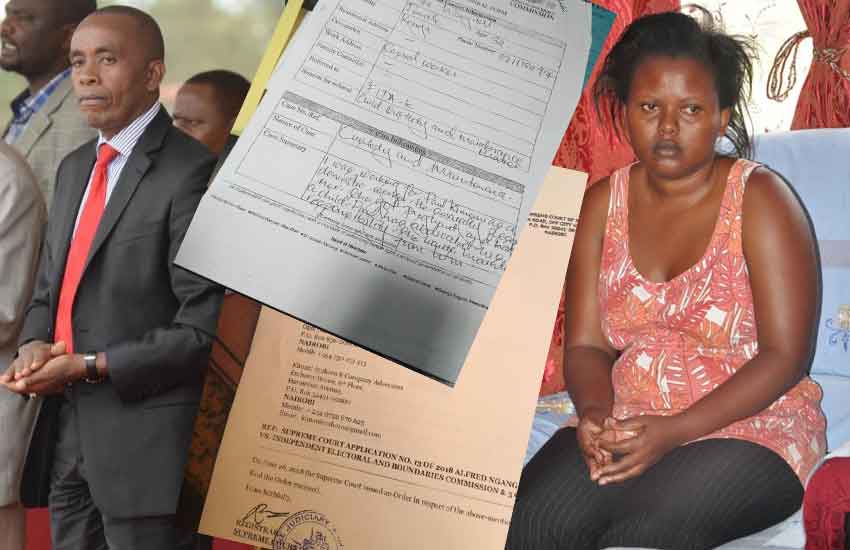 A house girl who claims to have been impregnated by Kiambu Senator Kimani Wamatangi (pictured) says the senator has neglected their 10-year-old daughter.

According to Winfred Wangui Kimani, the senator has only seen their child twice, “when she was two-months old and he gave me Sh7, 000, and towards the end of 2007, when he was vying for a parliamentary seat.” She further claims that, “He came home to see my mother with Sh20, 000 and promised to pay for his daughter’s upkeep.”

Part of Wangui’s sworn affidavit reads that: “The plaintiff avers that the defendant has a legal obligation to maintain his daughter in the following manners: Sh20,000 for school fees, an equal amount for house rent, Sh15,000 in medical care fee and Sh20,000 in clothing and miscellaneous expenses. The total expenses comes to Sh75, 000.”

Meanwhile, Wangui claims that Wamatangi is yet to take a DNA test which the court directed them to do.

A letter from the Ministry of Health to the Children’s Court signed by government chemist AW Nderitu states that, “This is to confirm that Ms Winfred Wangui Kimani presented herself to the Government Chemist on 28th day of May at 9:30am for DNA sampling.

However the sampling could not proceed as the other party, Paul Kimani Njoroge alias Wamatangi, had not availed himself by 3pm.”

Wangui says that although she sued Wamatangi for child upkeep in 2014, the case has never taken off since lawyers keep dumping it and her file has been ‘lost’ six times.

In March this year, Wangui approached Kenya Human Rights Commission for help and “they referred me to Fida who filed a new case at Kiambu Children’s Court on June 19.

The hearing which was set for Tuesday 26, June 2018 couldn’t proceed because the file had disappeared,” Wangui told The Nairobian, adding that, “I am totally tired. I don’t think I have the energy to fight for my daughter anymore. Money has won. I have lost five lawyers and the case has gone through four magistrates. They take the case, but within weeks, they ask me to get another lawyer.”

In the case, which Wangui initially filed at the Children’s Court on March 4, 2014, she accuses Wamatangi of raping and siring a child with her.

In a sworn affidavit filed in the Children’s Court in Nairobi, Winfred Wangui Kimani states that,

“I am the plaintiff herein and was from July 2006 working for the defendant as a house maid. On July 18, at about mid-day, the defendant defiled me in his house. He threatened me with dire consequences if I reported to the police. Subsequently, I left employment and conceived. I gave birth on April 23, 2007. The defendant has all along been aware of these facts. When I ask for child support, he erratically sends a sum of Sh3,000, which he sends after a long time and when he is pushed. I am jobless.”

Further, “The defendant has all along despite constant requests refused and/or neglected to provide any child support not withstanding that the plaintiff is jobless. The said minor is now in Class Two and the plaintiff is unable due to the fact that she is not in gainful employment.”

In his replying affidavit, Wamatangi claims he has never had intercourse with Wangui, labelling her an extortionist.

How Diaspora Clients Can Invest Directly In Kenya Without Being Conned

VIDEO:DRAMA as Tuskys CEO is Forcefully Evicted by Founder’s Grandchildren

Boost To Youth As Optiven Group Provides 9,000/- Per Month Offer

Al-Shabaab leader killed in US strike