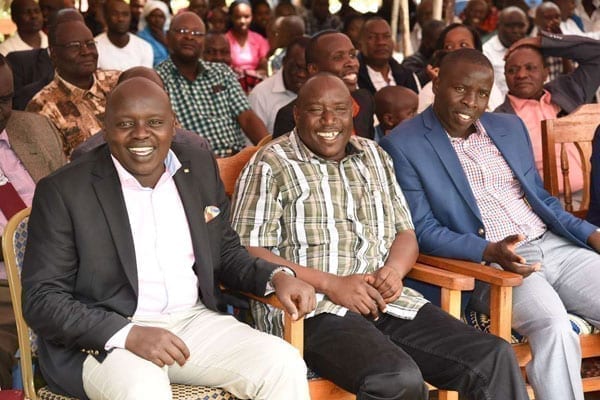 Three MPs from the Rift Valley have called on President Kenyatta to revoke his March 9 peace deal with ODM leader Raila Odinga, claiming it is a scheme to scuttle Deputy President William Ruto’s presidential ambitions.

They said Mr Ruto can only succeed President Kenyatta in 2022 if the “building Bridges” Initiative is dissolved.

Nandi senator Samson Cherargei and MPs Julius Meli of Tinderet and Wilson Kogo of Chesumei however said they support efforts spearheaded by President Kenyatta to fight corruption but warned that the campaign should not be politicised.

“As Jubilee leaders from Rift Valley, we are demanding that the handshake thing should come to an end as it is a stumbling block to bar Ruto from becoming President.

The aim of the handshake is a scheme by powerful forces who are out to ensure Ruto does not succeed President Uhuru in 2022,” Mr Cherargei said during a public rally in Nandi on Thursday.

Allies of the Deputy President have been uneasy with the March 9 deal, the war on corruption and the lifestyle audits on suspicions that Mr Ruto is the target.

The increasingly vocal Mr Cherargei has previously called for the disbandment of the Ethics and Anti-Corruption Commission , saying it is only targeting Mr Ruto and his allies. He has also demanded that relatives of President Kenyatta be subjected to lifestyle audits.

Mr Kenyatta this week warned Kenyans against politicising the fight against corruption, saying that he would not protect his brother Muhoho if he was involved in corruption. This was after Aldai MP Cornellius Serem linked Mr Muhoho to the contraband sugar scandal.

In his latest salvo, Mr Cherargei said Jubilee party supporters from all the 47 counties resolved in 2013 to support President Kenyatta to rule for 10 years until 2022 and then back Mr Ruto to succeed him.

This was seen as an attempt to heal the rift between members of the Kikuyu and Kalenjin communities, whose relationship has over the years been characterised by conflict at every election cycle.

The leaders said the handshake was not only a betrayal of the Rift Valley community but had diminished Mr Ruto’s chances of succeeding President Kenyatta.

The senator accused the President of going against the memorandum of understanding that would have seen Mr Ruto succeed him.

“Most Kenyans are committed to electing the DP as their next president because of his work ethic and focus but this is being undermined by some leaders in Jubilee who are working with Raila to frustrate his dreams,” said Mr Cherargei.

Let the Lord be your sole vindicator

Top 5 tips on how To Positively Dominate and Influence

Unmasking Githu Mugai: Is He an Enemy of the Church In Kenya?