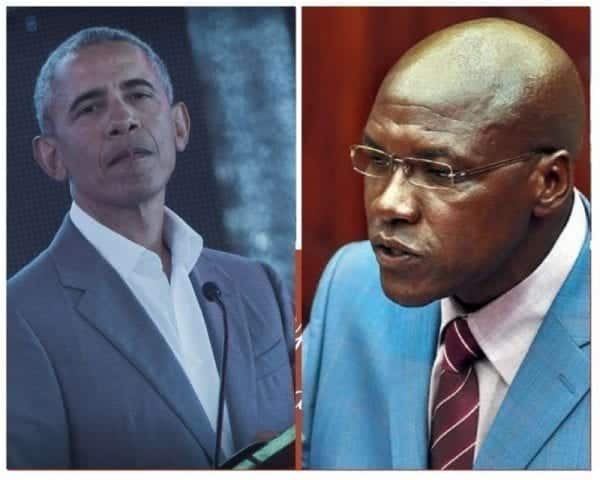 Former Kakamega Senator Boni Khalwale was trolled after his remarks regarding former US President Barack Obama’s visit to Kenya.

Obama who arrived in the country on Sunday 15 July, went to his ancestral home in Kogelo, Siaya County where he opened the Sauti Kuu Foundation sports centre.​

Khalwale later took to his Twitter handle and asked Obama why he did not bring any development to Kenya while he was still the President of the United States.

“Dear BarackObama, I believe u have landed safely in South Africa, and hope that this finds u well. With tremendous respect Sir, can u tell us why while u were in the most powerful office (of the world’s biggest economy) u refused to bring development to ua home, Kenya?” asked Khalwale.

However, most Kenyans thought the question he posed was inappropriate. Here’s what some of them had to say;

Senator ndugu, wacha hizo. Mr Obama is a solid, genuine, honorable man…a fantastic and kind human being who grew up without a dad. Stop the nonsense for God’s sake! Thank you.

So shameful Bonnie. Im so disappointed in you! Obama is an American with Kenyan roots; like you a Kenyan with Congo Forest roots. Obama owes kenya nothing! Likewise you owe Congolese nothing!— Ian Kochomo (@iankochomo) July 16, 2018

MP used to begging and asking for handouts till he thinks it’s a right to be helped. Boni should be asking himself what have I done for my country.

I am shocked to read that my good friend Boni believes that development can be “brought” or “send”. People empower themselves; they develop themselves, through hard work and honesty.— Dominic WALUBENGO (@waluwande) July 16, 2018

Sir, it is better to be quiet and look stupid than to speak ànd thereby confirm your stupidity… What are you and other local leaders doing with taxes meant to better the lives of your electorate? Don’t expect your neighbour to manage your home for you. GROW UP!!!— John Ogola (@jjogola) July 16, 2018

Allow me to answer this because the former President has absolutely no right to answer.
He was elected in America and not Kenya. You are the one who should be answering the question: Did you loose the political seat because of your failure to deliver?— Ndungu Gachane (@Ndungugachane) July 16, 2018

Completely misguided! Did you elect Obama to serve you? Shouldn’t you be asking those questions of your own elected representatives? @BarackObamaserved those who elected him, & they are for the most part satisfied— Tom Mboya (@TomMboya) July 17, 2018

I will ignore your ignorance on the first statement, FYI Ikolomani is a constituency in Kakamega county, Oparanya was elected based on his past record as Butere MP, when he was the senator, what did he do in rep County 037 at the national level?— Murunga Lilechi???????? (@lilechikenya) July 17, 2018