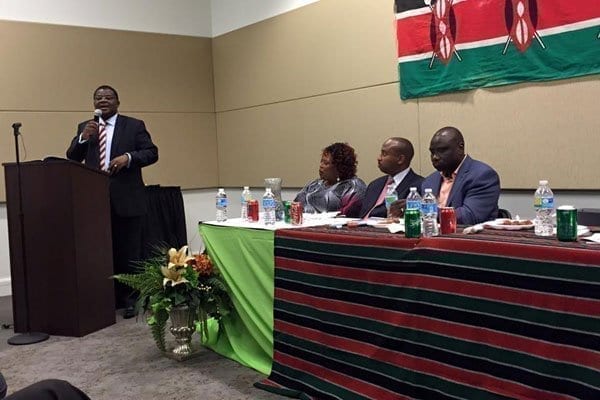 More than 40 Kenyan governors and senators are expected to attend the much-publicised diaspora summit to be held in Dallas, Texas on Monday.

According to the organisers, the leaders, most of whom are already in America attending the USA National Governors Association meeting in New Mexico, over the weekend agreed to a request by the Kenya Diaspora Advisory Council of Texas to “stop in Dallas on their way home to meet with Kenyans abroad and dialogue on Kenya’s development agenda”.

The conference, dubbed “A comprehensive dive into the Kenya Diaspora” is scheduled to take place from July, 23, 2018 at Holiday Inn, Texas.

It is organised by the Kenyan Diaspora Advisory Council of Texas, a brainchild of former Kenyan ambassador to the US, Elkanah Odembo.

According to the organisers, the main aim of the summit is to create a forum for Kenyans living in the US and Canada to exchange ideas on how to develop county governments.

Kenya Gov’t to collaborate with Kenyans abroad to…

Kenyans in the US and Canada are also expected to woo the governors and senators to support their push to take part in elections back home.

Majority of Kenyans living abroad twice missed voting in the general elections despite the fact that the Constitution guarantees their rights to vote.

“It’s all good to talk about development but if we are continually denied our rights to vote then the security of our investments is not guaranteed and that is unacceptable,” said Henry Ongeri, an attorney who is pushing a petition for the diaspora to vote through a new initiative called “Kenya Diaspora Must Vote”.

Benson Kioko Kasue, one of the organisers, told Nation that most of the governors and senators have confirmed their attendance, adding that the conference will culminate in a grand gala dinner organised in their honour.

“It’s all systems go and we are ready to host probably one of the biggest diaspora conferences in recent memory. A quick look at the list of those Kenyans living in the US who will be attending indicates that we will have representation from almost all the 50 states. We are very excited about this,” Mr Kasue said.

He revealed that more than 300 Kenyans in diaspora have already registered to attend the conference.

The conference will be officially opened by Kenya’s ambassador to the US Robinson Njeru Githae.