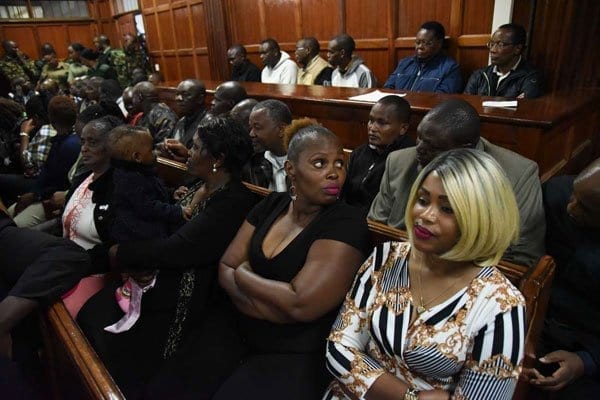 The stringent bond terms placed by the High Court to the National Youth Service (NYS) scandal suspects seems to have hit junior civil servants with many of the languishing in remand because they cannot get securities and post bail terms to secure their release.

So far, 30 people have been released after meeting the terms placed by Justice Hedwig Ong’udi last month. Most of them, however, are senior civil servants and business persons implicated in the scandal.

Every suspect was directed to execute a bond of Sh5 million, produce sureties of Sh2 million each and deposit cash bail of Sh1 million in court. They were also directed to deposit their passports in court.

The matter has been compounded by strict verification process at the Directorate of Criminal Investigations headquarters, following a directive by the Director of Public Prosecutions Noordin Haji, to the investigators to ensure that the bail and sureties to be used are not proceeds of crime.

A number of persons who volunteered to stand sureties for the suspects have been turned away because of hitches with their documents, prolonging their relatives’ stay at remand.

Others are Wellington Lubira, a former acting director of finance at NYS, Mr Sammy Mbugua, a former heads of accounts at the Ministry of Youth and Gender Affairs, Mr Kenneth Mburu Mwathi and Mr Peter Muritu.

Other senior civil servants who have been freed include Mr Lucas Otieno and Mr Josephat Njoroge both are former internal auditors at Treasury, Mr Christopher Malala, a former senior accountant at NYS, Ms Clara Mbao and Ms Andrine Grace Nyambura, both business persons.

But for other public servants including those who were storekeepers at NYS and those who are alleged to have been sent to collect foodstuff from the Mechanical Transport Branch (MTB) stores, are yet to secure their release.

The NYS staff are alleged to have collected foodstuff and signing backdated issuance vouchers and fake requisitions. The prosecution alleges that no procurement was undertaken before the millions for shillings were paid out.

It has also not been easy for the Ngirita family as none of their relatives has been released so far. The relatives, who are said to have received millions from NYS include their mother Lucy Wambui, her daughters Ann Wanjiku Wambere Ngirita and Phyllis Njeri Ngirita, Mr Jeremiah Gichini Ngirita and his wife Catherine Wanjiku Mwai.

Their lawyer Cliff Ombetta unsuccessfully pleaded with chief magistrate Douglas Ogoti to reduce their bail terms. Mr Ombeta said the family cannot raise a total of Sh5 million cash bail because most of their accounts and assets had been frozen by the court.

The pre-trial conference will be held on July 17.

So far, Kenya Bureau of Standards Managing Director Charles Ongwae has been handed the most stringent terms, after denying charges of attempted murder, for allowing the importation of substandard fertiliser into the country.

To secure his release, Mr Ongwae and seven other senior persons from Kebs were ordered to deposit a total of Sh15 million bond, sureties of Sh8 million and cash bail of Sh4 million each, to secure their release. The former Kebs MD has since been released after posting the bail terms.

Other than attempted murder, they denied charges of abuse of office, commission of a felony and breach of trust.

Bail or bond terms are meant to ensure that an accused person attends court, when required.

In the fertiliser case against Mr Ongwae, the court heard that the agency unlawfully released to OCP (K) ltd, some 5,846,000 kilograms of substandard compound fertilizer which contained mercury, a sustenance that endangers human life. It is alleged that they committed the offence between November 13, 2017 and June 7, 2018.

After denying the charges, senior principal magistrate Kennedy Cheruiyot ordered each of the accused person to execute a bond of Sh10 million to secure their release. Each accused person is expected to deposit surety of Sh3 million each plus an additional cash bail of Sh2 million.

The court heard that they Kebs bosses knew that the company had no capacity to supply the stickers, when they signed the contract between December 9, 2014 and May 23, 2018.

Video:Raila and Ruto clashed bitterly in parliament over ICC

Optiven Firmly Committed to Going Green to protect the environment

Letter claiming Waiguru off the hook stirs up social media