Development by day, politics by night: Ruto’s path to 2022 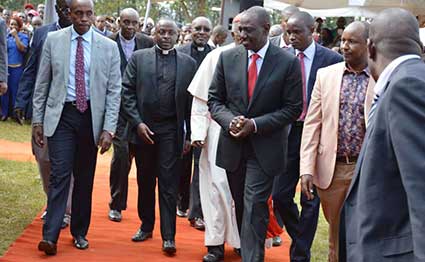 Deputy President William Ruto is reaping maximum benefits from his frequent visits around the country, using day time to drum up support for Jubilee’s Big Four Agenda, and night time to recruit politicians into his 2022 camp.

In the last few days he has met leaders at night in Meru, Nyeri, and Turkana, and more such meetings are planned across the country. Sources told the Sunday Nation on Sunday the meetings start at 8pm and last into the night, sometimes well past 1am. Mr Ruto’s preferred attendees during these nocturnal discussions are elected leaders, particularly members of county assemblies and MPs.

He recently met with county Speakers at his Karen office in Nairobi, and even though a press dispatch indicated the meeting had steered clear of politics, the move to assemble regional Speakers in one room is indicative of the direction his campaign to succeed President Uhuru Kenyatta in 2022 is taking.

For one, this was the first meeting where all Speakers of county assemblies had met a top Jubilee leader and, encouraged by the outcome, Mr Ruto is now extending his embrace to include the country’s MCAs, whose legislative direction is moderated by the Speakers he met.

The Deputy President is, however, yet to set up a think tank of advisers to oversee his strategy, which has been the tradition of other presidential contenders before. For now, he is relying on two fronts to deliver the promise — his point men across the country, and his sagely mobilisation skills.

Last week in Meru, Mr Ruto held a late night meeting with local leaders after a daylong tour of the region during which he inspected development projects. He was escorted during the tour by Senate Deputy Speaker Kithure Kindiki as Governor Kiraitu Murungi was attending a wedding of a close relative.

The night meeting was attended by MCAs from Meru, Mr Murungi, Prof Kindiki, and several MPs from the county. While expressing their support for Mr Ruto’s 2022 presidential bid, the leaders said the DP should return the favour by ensuring the development projects, including roads and piped water, pledged by the Jubilee administration are delivered.

The support was also on condition Mr Ruto picks his running mate from the Meru community, Prof Kindiki and Trade CS Peter Munya having been mentioned as possible candidates. Mr Munya has, however, said he is not interested in being anyone’s running mate as he is focused on delivering on the government’s development agenda.

Senator Kindiki, meanwhile, supports the idea, saying the region is keen to take the number two position in the next government.

However, it was the insistence that Mr Ruto is the natural Uhuru successor that crowned the Deputy President’s night. Saying Jubilee Party had pledged to hand over the presidential baton to Mr Ruto once President Kenyatta retires, they said the party should not, at the last minute, start placing hurdles on the way of the DP.

“We agreed that the DP will get his 10 years once President Kenyatta concludes his term,” Meru deputy governor Titus Ntuchiu said. “There is no debate about that, and the handshake (between President Kenyatta and Nasa leader Raila Odinga on March 9) should not disrupt this plan.”

North Imenti MP Rahim Dawood said Mr Ruto was Jubilee Party’s only known flagbearer in 2022, while South Imenti MP Kathuri Murungi assured the DP of support “if he pushes for development in Meru”.

“We have promises made between 2013 and 2017 that are yet to be fulfilled by the government.  If the DP pays this debt, it will be easy for us to endorse him in 2022, otherwise we will be seen as liars by our people. We want to go back to the people in 2021 with good roads, water and other development projects,” said Mr Murungi.

Source also indicated that, during the night meeting, Mr Murungi maintained, as things stand now, Mr Ruto is Jubilee’s presidential candidate for 2022, and that only party delegates can overturn that decision since a resolution was passed to that effect last year.

The next day Mr Ruto was in Nyeri, where he hosted leaders, once again, for a night meeting during which he sought to allay fears that he was at odds with the Head of State.

During the three-hour indoor meeting at Fairmont Hotel in Nanyuki, Mr Ruto said President Kenyatta supports his 2022 ambitions, and that the handshake between the Head of State and opposition leader Raila Odinga has not changed the Jubilee leaders’ political vision.

Two MCAs who attended the talks on Saturday night told the Sunday Nation that Mr Ruto spent considerable time quelling fears of a falling-out with the President and divisions in Jubilee Party.

Mr Ruto is also said to have told the gathering on the foot of Mt Kenya that President Kenyatta will personally campaign for him when the season comes. The MCAs requested anonymity for fear of reprisals from the party, but said they had been invited for the meeting by Nyeri County Deputy Speaker Samuel Kariuki.

Those in attendance included Governor Mutahi Kahiga, five MPs and 41 MCAs. Nyeri Town MP Ngunjiri Wambugu did not attend. He later said he had not been invited.

Mr Gachagua admitted he was in charge of sending out invitations to his fellow MPs, but refuted claims the DP’s agenda was political. On the contrary, he insisted, Mr Ruto discussed development projects, including completion of the Karatina open air market that has been under construction since 2010.

But Mr Wambugu said the meeting was meant to buy out leaders and discuss his deviant behaviour. “The meeting was not important given that I was not invited. But had I received an invitation, I still would not have attended,” he said.

So, what is it about the Deputy President that has politicians trooping to his meetings? Other than the promise of launching or maintaining political careers, what else do those who keep Mr Ruto company into the night find attractive in the man?

Murangá Senator Irungu Kangáta, speaking on TV recently said majority MPs have a “strong and personal bond” with Mr Ruto.  A sentiment Kimilili MP Dr Chris Wamalwa confirmed when he said: “You call him he will pick your call. We are told he is generous.”

The Deputy President’s aides say that strategy is hinged on the fact there are powerful individuals who are out to ensure Mr Ruto does not become president.

That group, claimed the aides, has been holding meetings in Nairobi to plot how to stop Mr Ruto, and has already identified a governor from western Kenya to push the presidency towards.

The aides did not give evidence of these meetings, or the alleged scheming against Mr Ruto, but such fears within the DP’s camp could be the wind under his political sail.

Mr Lomenen said professionals, especially those from Turkana South and Turkana East sub-counties, asked the DP to give them State jobs so that they can feel part of government.

Additional reporting by Sammy Lutta in Turkana, Grace Gitau in Nyeri, and Justus Wanga in Nairobi.