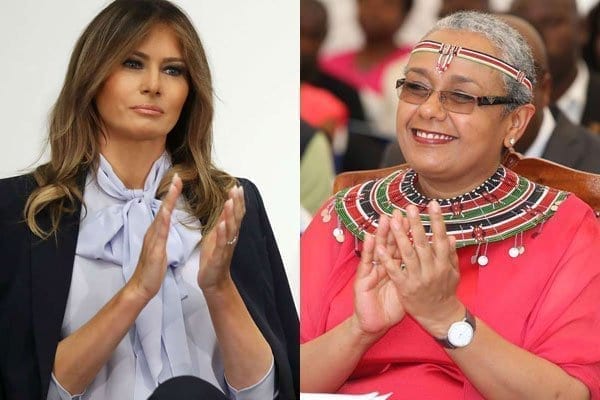 Kenyan First Lady Margaret Kenyatta will participate along with her US counterpart, Melania Trump, in an initial round of talks today between the countries’ presidents, the White House said on Monday.

President Donald Trump’s schedule lists a 20-minute bilateral meeting starting at 1:55pm Washington time that will involve the two women as well as the US and Kenyan leaders.

Mr Trump and Mr Kenyatta will have “an expanded bilateral meeting” set to last 45 minutes— from 2:15 pm to 3 pm, the White House announced.

Mr and Mrs Kenyatta are then scheduled to depart from the White House at 3pm.

Today’s meetings coincide with a report in Monday’s Financial Times that Mr Trump had described Nigerian President Muhammadu Buhari, 75, as “lifeless” shortly after the two men met at the White House in April.

Mr Trump stated that he did not want to meet ever again with someone exhibiting that trait, the London-based newspaper reported, citing three unnamed sources for the disclosure.

If Mr Kenyatta offers a more vigorous presence at today’s meeting, that could be a positive prospect for US-Kenya relations, the Financial Times suggested.

The newspaper’s story included this passage:

“’Trump likes chemistry,’” said a person in touch both with senior US administration officials and the Kenya delegation preparing for Monday’s meeting.

“Africa has never been high on his radar but if the big guy likes you he’ll find a way to make things work.’”

3 Things That Can Keep Your Dream Alive