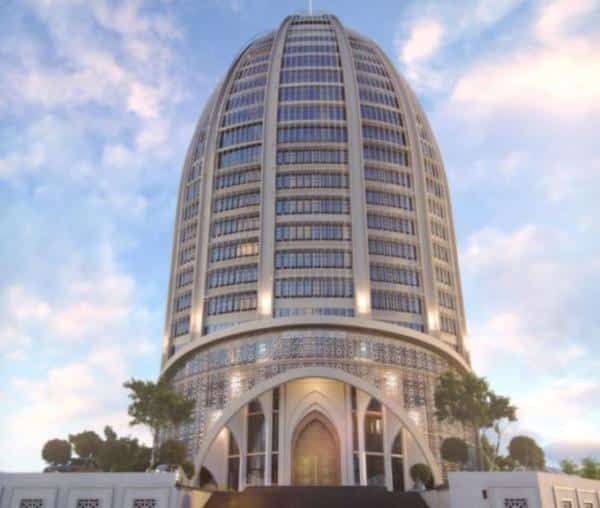 Nairobi’s construction boom is changing the city’s skyline almost daily. Developers are coming up with designs that are very different from structures that topped the list of Kenya’s iconic buildings such as the Kenyatta International Convention Centre and Times Tower. Here are five recent structures attracting attention. Which is the fairest of them all?

The 29-storey Prism Tower by Kings Developers commands the skyline in Nairobi’s Community area where old government buildings held sway for decades. As the name suggests, the design of Prism Tower is unmistakable with its prisms that appear stacked upon prisms.

“The concept of the jewel is the inspiration for the design and architecture behind the making of this iconic tower,” states Kings Developers. During the sunrise and sunset, when the sun emits golden rays, the vivid colours create the magical facets of a fine-cut jewel.

The design is meant to provide a ray of hope to the tower’s clientele and bring out the creativity spectrum among Nairobians. Wags on social media have gone gaga about the building with some saying it is the cutest in town. Others labelled it “crooked” owing to the exterior glass design. The tower will be officially inaugurated by President Uhuru Kenyatta today.

The 21-storey FCB Mihrab, located at the intersection of Lenana and Ring Road Kilimani in Nairobi.

Built at a cost of Sh1.3 billion by Mihrab Development Ltd, this retail and office tower is the latest architectural masterpiece in the city. Located at the intersection of Lenana and Ring Road Kilimani, the 21-storey tower incorporates a mix of Islamic values and secular tenets.

Designed by Morphosis, its outstanding feature is its semi-circular design mimicking the niche found in mosques and that indicates the direction of the Muslim’s holy city Mecca. “The ‘Mihrab’ from where the leader stands to proclaim ethical practices, the domain from which the voice is amplified,” states a citation on the building’s website.

The Middle Eastern architecture and choice of construction materials reduce heat gain into the building. A bridge on the entryway signifies crossing over into serenity, a key principle in the Muslim faith. Nairobi’s night owls looking for a good time may find it hard to operate from here. The developers have incorporated Islamic business practices where businesses associated with either alcohol or gambling are avoided.

Right opposite FCB Mihrab is Sifa Towers, a 12-storey commercial development that creates an optical illusion due to its seemingly irregular design. It is yet another structure developed by Kings Developers and designed by A+I Design Architects.

Perhaps not many know that Sifa Towers is predominantly a steel structure encased in concrete and grazed all round with glass, or Multi-Storey Steel Building Concept. Steel is among the sustainable construction materials that can be reused after the lifetime of a structure. Although built in the tropics, the use of low energy glass minimises the entry of ultra-violet rays into the building.

A key challenge in construction was to erect such a building in a very tight site with heavy traffic. However, the developer was able to use prefabricated steel that allowed for quick erection on site. With minimal work force on site, the erection of the entire framework took 18 weeks!

The Oval, named after its shape.

Designed by local firm Bowman Associates, the building takes the form of, well, the oval. The building was the runner-up as the best commercial building in Nairobi two years ago.

The designers are behind other properties in Nairobi such as Junction, Westgate and Galleria malls.

The cylindrical shape gives the impressions of unending pursuit where one feels like just circling to peer into the hidden side. A central atrium compliments the natural lighting of the wide entrance.

The 15-storey twin buildings along Chiromo Road in Westlands take the shape of a sail, a feature synonymous with the East African coast for centuries. They were developed by Riayn Developers Group, a family-owned company with keen interest in residential homes and office blocks.  The group is also behind The Edge, another high-end commercial property in Parklands.

Kenyan Diaspora Medic Behind Unique Technology Saving Lives in US