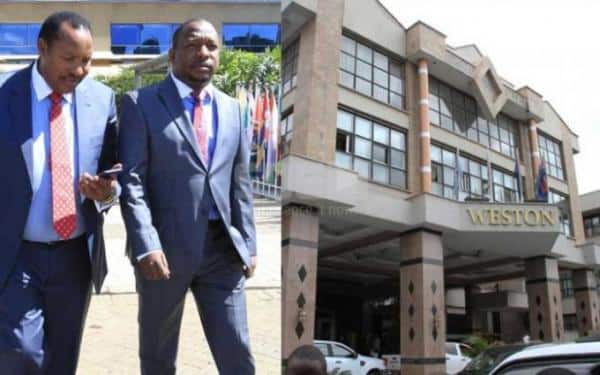 Speaking on Sunday, Waititu had called for changing of rivers’ course rather than demolishing buildings sitting on riparian land.

“I cannot support demolition of buildings built on riparian reserve as some people are doing. Things should be looked into and if your house is near the river, you should be told to foot the cost of ‘relocating’ the river a little bit,” Waititu stated.

In his rejoinder, Governor Sonko urged Waititu to instead shift focus to his own county.

“My good friend and colleague should concentrate on his county. He should know we don’t mix friendship with work,” a statement by Sonko read in part.

In the statement, Sonko further said that Weston Hotel, which is owned by DP William Ruto will also be demolished if found to be on riparian or public land.

“Even Weston, my Buru Buru Casurina cocobeach plot, Taj mall and many other buildings shall not be spared if found to be on riparian or public land,” he stated.

This comes a day after economist David Ndii urged President Uhuru to cut ties with the DP, claiming that the land on which Weston Hotel sits on is public land.