US Okays Direct Flights From JKIA, Funds The Initiative 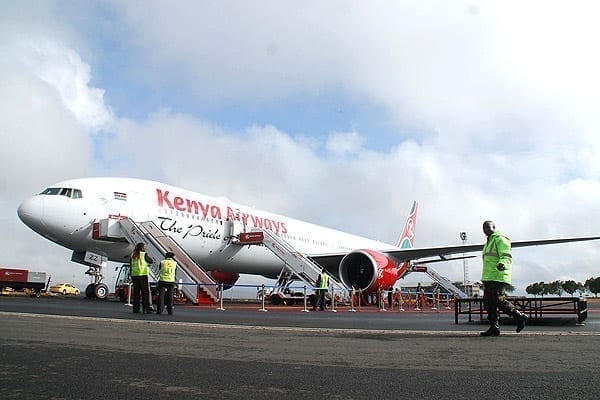 The Jomo Kenyatta International Airport (JKIA) on Thursday received an authorization letter allowing the airport to facilitate direct flights between Kenya and the United States.

The letter was formally presented by US Ambassador to Kenya Robert Godec in the company of Transport CS James Macharia.

Godec also announced that the US will also give Kenya Airports Authority (KAA) Sh150 million that will hep in the provision of additional security, equipment and training.

“This is a major achievement for Kenya as JKIA becomes one of the elite African airports to be certified as a last point of departure to the United States,” KAA director general Jonny Andersen said, noting that the maiden flight is set to depart on October 28, 2018.

CS Macharia on his part said that his ministry will work towards putting an expressway from JKIA to the CBD in the next six months. He also noted that the number of tourists jetting into the country is expected to soar from the current 7 million to 12 million.

“This is a great milestone not only for KQ but also the country. All stakeholders should be geared to protect this achievement.”

This comes shortly after President Uhuru Kenyatta’s trip to the US where he held talks with President Donald Trump.

During the bilateral talks Uhuru witnessed investment deals worth $238 million signed between Kenyan and US companies.

“The meeting with President Trump was fruitful. We discussed security, especially the fight against terrorism. We also discussed how to increase trade and investments between our two countries and how US companies can help create jobs for our youth,” Uhuru told BBC.