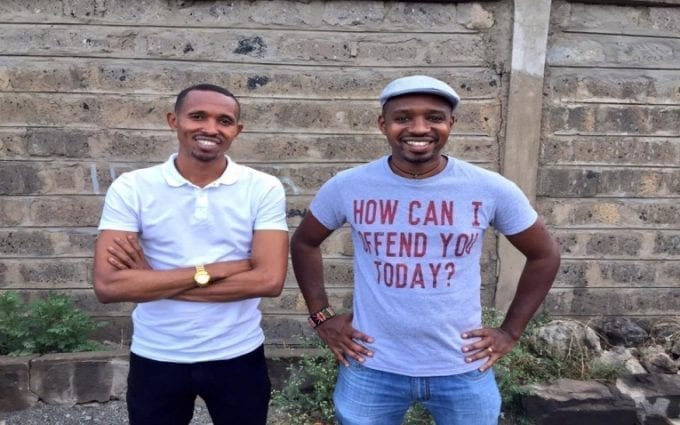 The MP has previously been blasted by vocal activist Boniface Mwangi over his calls on revolution. Ali came out saying that his critics should quit complaining on social media and instead meet him face to face to strategically engage in changing the country.​

This undoubtedly explains the meeting.

In his post published on facebook, Boniface Mwangi explains how the Nyali MP reached out to him asking him to meet and talk.

“While resting at home yesterday, I received a call from Moha, who told me that we needed to talk. I haven’t met, or spoken to Mohammed Ali Jicho Pevu since he started hanging out with Ruto, but he is a friend I have known for about 10 years, or more. When someone you have known that long says we need to talk, you drop whatever you’re doing and go see them. I met up with him and we spent the next five hours together. Moha did most of the talking.” His post read.

The Nyali MP invited rage from Kenyans after he joined a group of MPs who flew to Russia to watch the World Cup at tax payers’ expense in the name of bench marking.

Moha however explained his side of the story to Boniface Mwangi saying he went because the Speaker gave him a letter to do so and only watched two games unlike the MPs that were there for a whole month.

“On his trip to the FIFA World Cup in Russia, he said he went because the Speaker gave him a letter to do so and he only watched two games, but other MPs were there for a month. I found that excuse very lame, but he added that he spent a good part of his time meeting Kenyans living there and, in the process, learned about their suffering and the fact that our Embassy in Russia is run by Russians. He claims he did a report about the same and l look forward to that report being made public.” Read the post.

Moha tells Mr. Mwangi he has done his first exposé since he was elected, it talks about bribery in Parliament and how parliamentary journalists must be bribed to write certain stories.

He says almost every single MP is corrupt and he said he finds himself totally isolated.

“Lessons learned in his first year in parliament? In a nutshell, Mohamed Ali depressed me. We don’t have a Parliament, but an auction house. Moha wants to talk. He has done his first Jicho Pevu exposé since he was elected; it’s called Dunia Gunia. He told me about the stories of bribery in Parliament and how parliamentary journalists must be bribed to write certain stories. Almost every single MP is corrupt and he said he finds himself totally isolated.” Moha told Boniface Mwangi.

The exposé is called Dunia Gunia and will be released in coming days.

When asked about his close relationship with Deputy President William Ruto, the Nyali MP says that came about because he wanted development for the people of Nyali.

“What about his closeness and association with the Deputy President, William Samoei Ruto? He said that came about because he wanted development for the people of Nyali. I inquired whether he had received any bribe or money from the Deputy President, or from any other person? He replied, “No”. He claimed that he takes home Sh75,000, after paying his mortgage and monthly living expenses, which includes the lawyer representing him on his just concluded election petition.” Moha explained to Boniface.

The Civil and human rights’ activist says what Moha desperately wants is allies to work with and expose the rot within Parliament and in the Government.

Moha says Kenyans deserve to know the truth, but he can’t fight alone. He told Boniface he has seven lawsuits pending in court, as a result of mentioning the names of companies involved in NYS 2.

He says he can’t find even five MPs to work with, inside Parliament, to expose the rot. The few non-corrupt MPs, Moha told Boniface, mind their own business, stay away from national politics and focus on their constituencies. They won’t work with him.

There are 10 other independently elected MPs, but they have aligned politically with either Uhuru or Raila.

Mwangi and Ali popularly have been long time friends courtesy of their advocacy against societal ills like corruption and having worked as journalists at Standard Group.

Boniface Mwangi promised to support him if the documentary is legit and called a few organizations who can provide legal support.

Ali told Boniface this documentary will be the beginning of many more to come. He told him that without public support, the corrupt will eat him alive.

Revealed: MPs who are mute in Parliament but vocal in public meetings