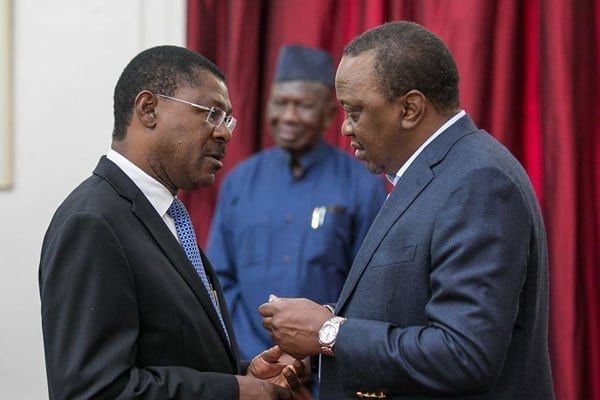 President Uhuru Kenyatta on Monday met leaders from five counties in Western Kenya as well as leaders from the Wiper Party for talks on development and the “building bridges” initiative.

The talks with the President focused on the road map for the realisation of the ‘Big Four’ agenda, the heightened fight against corruption and the building bridges initiative, causes which the leaders pledged to support, a statement from State House said.

The revival of sugar companies in Western Kenya topped the agenda with President Kenyatta giving a one month deadline to a team working on a revival plan for Mumias and Nzoia sugar mills to complete their assignment and present the way forward.

“I am certain that within one month, we shall have the way forward on how to revamp the sector and where to invest more money,” the President said, adding that the government cannot continue pumping more money to dysfunctional companies unless they are revived.

Noting that corruption and mismanagement were to blame for the current woes facing the local sugar industry, President Kenyatta was optimistic that the report on the revival of the sugar sector will provide a clear roadmap to move the sector forward while benefiting sugarcane farmers.

Mr Wetangula called for a firm government policy that checks on imported maize and sugar to ensure cheap imports do not destabilise local production.

In a separate meeting with the President, Wiper leader Kalonzo Musyoka revealed that the party leadership had passed a resolution to work with the government.

Civil servants free to campaign for Jubilee and Uhuru Kenyatta

Challenges of Kenyans in Diaspora who are out of status