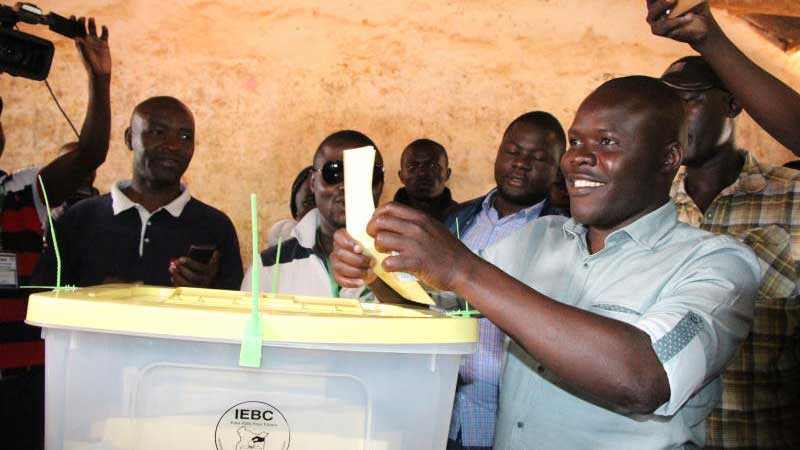 Migori and neighbouring towns yesterday came to a standstill as the Orange Democratic Movement Party (ODM) celebrated its victory in the just-ended Senate by-election that saw it reassert its authority in the region’s politics.

Dozens of party officials accompanied by a mammoth crowd rode in countless vehicles, honking, whistling and singing as they celebrated the win by Ochillo Ayacko, who bagged 85,234 votes to beat his closest opponent, a youthful businessman Eddy Gicheru Oketch of Federal Party of Kenya. Oketch got 60,555 votes.

Transport was paralysed for several hours on the Isebania-Migori-Rongo highway and motorists had to seek alternative routes as excited ODM supporters sang in praise of party leader Raila Odinga, who they said was the biggest beneficiary of the by-election.

“Raila has shown them he is still the king. This is just a sneak preview of what will happen in 2022,” said an ODM supporter as he jogged after the vehicle carrying Mr Ayacko.

But even though the victory saw Ayacko bounce back into active politics after 15 years in political limbo, the by-election has raised the profile of Mr Oketch, whose well-oiled  campaign has left tongues wagging.

Although Ayacko beat him by a margin of 25,000 votes, Oketch rippled the ODM brigade, forcing it to mount one of the biggest campaigns ever seen in Nyanza.

Besides Raila, who spent two days campaigning for Mr Ayacko, more than 20 MPs and over 50 MCAs descended in Migori to ward off Oketch’s influence that was giving them sleepless nights.

But who is Eddy Oketch? The 27-year-old is an alumni of African Leadership Academy in Johannesburg, South Africa. He came to the fore last year when he contested the Migori Senate seat and emerged second after the late Ben Oluoch Okello.

Oketch grew up in rural Migori with the support of wellwishers after his parents died. He attended Friends School Kamusinga, the Johannesburg institution, Trinity College in the US and Yale University, where he graduated with a Masters in Global Affairs.

Oketch was running on the FPK, a party associated with former Minister Cyrus Jirongo, who used it to vie for presidency in 2017. Jirongo never went to Migori to campaign for Oketch.

While Ayacko’s campaign was managed by Raila, senior ODM officials and MPs, Oketch surrounded himself with little known political activists and youths who coordinated his campaign. He used helicopters and several four-wheel drive vehicles, sparking rumours that he was being funded by Deputy President William Ruto. Oketch denied the claim.

In a statement after he conceded defeat, Oketch said: “Regardless of the results, I want to thank the people of Migori and my campaign team for standing with me.”

He added: “As the people of Migori, you have become the face of fighting for electoral justice, democracy and alternative leadership in Kenya. The fight for these social ideals continues. As long as I live, I will always be at your service.”

At the height of the 2007-2008 post-election violence, Oketch founded Ongoza, an organisation that empowered youths to help end the chaos.

Oketch has been recognised with the 2012 Impact Award from the Kenyan US Diaspora, the 2013 Africa Village’s Top 30 Under 30 Most Inspirational Young People on the African continent and Salt’s 2015 top 30 under 30 most innovative and influential youths in Africa.

Oketch claims voter bribery marred the election and if it were not for the ODM bigwigs, he would have beaten all the candidates hands down.

Green Congress Party candidate Peter Jobando congratulated Ayacko. “The voice of the people is the voice of God. The people have spoken,” he said.

A KENYAN MAN HAS PASSED AWAY IN MANCHESTER, UK