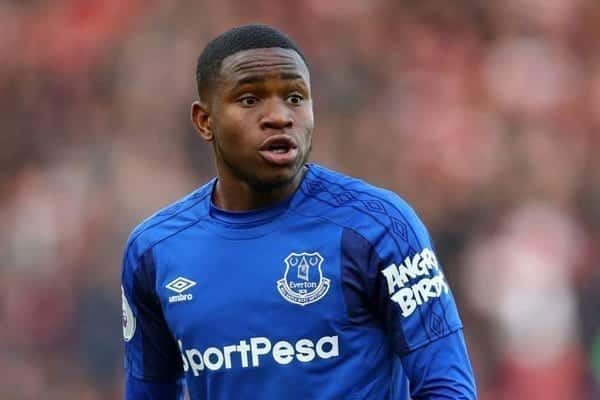 When the 17-time Kenyan champions left Nairobi for England last Friday, they set out on a journey of adventure – a life-time experience to play against an English Premier League club at their own turf.

And adventure they got in plenty with Ademola Lookman the star of the show at the Goodison Park as Everton strolled to a 4-0 win to clinch the SportPesa Trophy on Tuesday evening.

Gor Mahia Patron Raila Odinga had rallied the Green Army in his pre-match talk saying “Wana mbili na nyinyi mko na mbili… hawana tatu, ni wanaume  kama nyinyi!” but that turned out to be mere motivational talk as The Toffees only needed 23 minutes to prove their might.

Perhaps an extended spell of possession from the Kenyan champions inside the opening 10 minutes had given them false confidence but Ademola Lookman served them a reminder of who the big boys were with an easy tap-in on the quarter hour mark to open the scoring.

Stealthily escaping the attention of Karim Nizigiyimana, Lookman connected to a low cross from Cenk Tosun at the back post to place the ball past Boniface Oluoch. It was the kind of move that always looked likely to produce a goal after Dominic Clavert-Lewin cleverly slid the ball into Tosun’s path who made full use of acres of space between Joash Onyango and Shafik Batambuze before sending in his cross.

Gor sought a reply but the absence of Rwandan international Jacques Tuyisenge, their top scorer in the league last season, was clearly being felt with his replacement Francis Mustapha struggling to rise to the occasion.

Marco Silva’s charges successfully turned defence into attack to double their lead in a well-orchestrated counter attacking move that dimmed any smidgen of hope for the SportPesa Super Cup holders. Yerry Mina rose high to head clear Batambuze’s delivery from a corner and the counter was on!

Lookman picked the clearance, showed quick feet to free himself from four green shirts before setting Calvert-Lewin racing towards the K’Ogalo box. Onyango, in his true no-nonsense self, timed his sliding tackle perfectly to dispossess the lanky forward but Kieran Dowell picked the loose ball before slotting past Oluoch – bringing back memories of his screamer in Tanzania that turned out to be the winner the last time these two sides met in July last year.

The pattern of the early exchanges resumed with Gor Mahia bossing possession though they could not conjure a clear cut chance. George Odhiambo decided to take matters in his hands on 32 minutes when he embarked on a solo run cutting in down the inside left channel but he skied his effort into the empty stand behind Maarten Stekelenburg’s goal.

Calvert-Lewin should have showed him a better technique of finding the net moments later but his curled effort went inches wide of the left upright as the men in blue sought to cushion their lead.

If that moment had sent chills down the Gor Mahia dugout heading to the break, what transpired shortly after the restart must have shook them to the core. Lookman, a constant menace on the left, seamlessly weaved his way past five Gor players but he was denied a memorable goal by Batambuze who made a timely goal-line clearance.

Earlier, Odhiambo had burst into the Everton box but his low cross across the face of goal went unattended to.

Mustapha missed Gor’s best chance of the day on 57 minutes when Stekelenburg came off his line to deny Odhiambo who was a yard late from reaching a dinked pass from the impressive Francis Kahata. The ball fell kindly for Mustapha to score into an empty net but his finish veered awfully wide.

Dylan Kerr’s patience with the Burundian was certainly running out and he withdrew him just seven minutes later, replacing him with Kevin Omondi as Peter Odhiambo took over the goalkeeping duties from Oluoch.

With the tie settled as a contest, Kerr made a string of changes in a bid to give all his players a taste of the experience. Youngster Raphael Asudi, Wesley Onguso, goalkeeper Shaban Odhoji, Charles Momanyi, Lawrence Juma, Bernard Ondiek and Humphrey Mieno all benefitted with a run-in.

Everton though, still meant business as their substitutes Nathan Broadhead and Oumar Niasse got on the score sheet late on to put gloss on a fine performance from the hosts; Broadhead arriving late in the box to turn in James McCarthy’s cross with his shoulder before Niasse fired a low drive that came off the inside of the woodwork on its way in past Odhoji’s despairing dive.

It was truly a real football lesson for Gor Mahia and a day they will live to painfully remember having soaked in four without a reply. Adventure turned sour!

Kenyan Professor has passed away in New Jersey

Video:Uhuru goes through JKIA as citizen

How NASA messed itself up right from the beginning