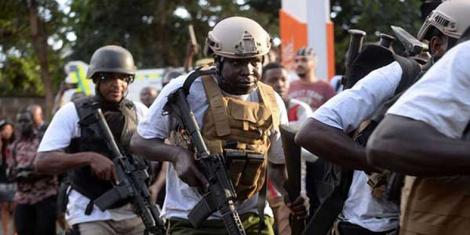 The multi-agency security team investigating Dusit terror attack has widened its scope to Kitui County after local police arrested three foreigners and a Kenyan in two hotels suspected to be terrorists.

One of the suspects, a man of Somali decent aged 47 years had a British passport bearing the name Muhudin Hassan, which police suspected is forged.

Other two suspects did not have any travel or identification documents.

According to Kitui County Police Commander Antony Kamitu, Mr Hassan was arrested Saturday at dawn at Parkside Villa Hotel in Kitui town where he had checked in on Friday evening.

After a brief interrogation, he led the detectives to another hotel within the town where the other three suspects were arrested.

Mr Kamitu said the four suspects could not give a proper account of themselves and were thus put in custody awaiting further interrogation by the multi-agency police team.

“They have told us they are businessmen dealing with sale and distribution of petroleum products. This is yet to be established as only Musa Abdulkadir has Kenyan identity card” said the county police boss.

The police commander said the four will be added to the anti terror police.

Police said they raided the raided the two hotels around 4am following tip-off.

But an attendant in one of the hotels told the Sunday Nation, that the arresting officers had photos of the suspects and only demanded to know in which rooms they had been booked in, before storming in.

In the past, several terror suspects have been arrested in Kitui, including Mohammed Abdi Wahab, who was believed to be a key leader of the Al-Shabaab terror network in Somalia.

The terror suspect was arrested in Mwingi last year as he attempted to sneak his way into the capital from the war torn Somalia after slipping police dragnet in Garissa.

A team of officers from both the National Intelligence Service and Anti-Terror Police Unit in Garissa are said to have been monitoring the movements of the suspect for a while but he slipped by hiking a lift in the high end car.

The suspect escaped by hiking lift in a car heading to Nairobi prompting anti-terror detectives to lay trap at in Mwingi town where they arrested him at a roadblock, after being given particulars of the car and the terror suspect’s description by their Garissa counterparts.

Raila is a liar, he never sought my permission to allow Ntimama address parliament,…

Video of the Day : Oliech’s Mother Throws A Tantrum in the Courts

Africa Is The Shithole Parent Who Breastfed The USA