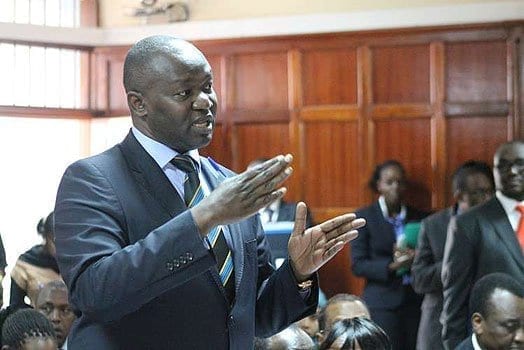 A section of Kenyans in the Diaspora yesterday reacted angrily over the spate of corruption currently tearing the very organ of the Kenyan Government many have faith in and it is now evident that unless the judiciary is overhauled, Kenya is doomed.

A single Professor Ojienda has amassed billions out of bogus cases by colluding with Government, Parastatal and County government heads to such a proportion that defies human understanding.

We hereby post as recorded and then also record comments from a section of one Diaspora forum and the cries are overwhelming and it will take more than Uhuru’s efforts to combat the monster.

It is not by coincident that one individual has been mentioned in many corruption cases, it must be REAL.

Courts have a habit of silencing advocates of truth not to comment on matters pending in court but at times it’s unbearable and we MUST go ahead and use the Gods given freedom of speech that is also enshrined and guaranteed in our constitution.

Read to the end and stand up to save not a planet in peril but a Nation called Kenya that is on the path of destruction.

Kenya Gov’t to Open Diaspora Departments In All…

Only Kenyan farmers did not know the case was even in court. Mumias paid 12 million to Ojienda…none of which got to the clueless farmers.

Only workers at Mumias knew of the automation and knew nothing about the case. Ojienda cleared 15 million from Mumias in out of court settlement.

These are just a few of the bogus cases Prof. Ojienda used to make himself a billionaire. He has a network of judges and lawyers who push the case through court and receive a cut from the payments and settlements.

What Do others Feel

D.K. Gitau felt that a TOTAL re-haul to the whole system is necessary….A rebirth

I think the problem is the system and the mindset we use to elect leaders. We rely on the oppressed to decide for the entire country who to lead them and they have no choice but to vote the only ones they know.

The independence of judiciary is now being mocked and manipulated not by the executive but by the institution itself making me to conclude that the executive or the legislative should control it just like it was during the reign of Kenyatta and Moi.

That is the monster to fear more than tribalism more than even terrorism for its terror in itself.

When it comes to voting our leaders, the elite watch from fence and participate in forums and magazines but stay away on the day of voting.

We don’t vote true patriots but we only recycle dynasty garbage rabid dogs as recently baptized by one political analyst  Mutahi and echoed by one party big wig Murathe.

Who is he? Who was the father. Etc and it’s only the remnants of the home guards that will eventually lead…. Recycling trash to make napkins when we have forest to get clean ingredients
When will Kenya get a Martin Luther, a Mandela, a mahatma Ghadhi?  Obama,…Men that are only interested in changing society while denying themselves.
If there is no genuine movement for total change we are doomed and it will get even worse come 2022 for if we maintain the same crop breeds of current leaders, corruption will still continue.

Maybe we train our young ones who are not tainted (born in America) to be politicians…. take them to college to do political science if it teaches good governance then export them to Kenya. Or what do we do? Any serious person is always discouraged and Kenyans like crooks to lead them.
How do you explain a Vice President who now have all the likelihood of becoming the next president to become a billionaire in less than ten years.Does he work harder than the rest of Kenyans?

Anyone associated with corruption whether real or imagined should be removed and forgotten.

Who is bold enough to stand out and guide Kenyans to choose a god fearing visionary leader not impostors?
The country is at the verge of being auctioned while we watch.
Let’s be real

Flo had her brief views

Children who are born here??? I beg to disagree, when you have a good heart and care about other people, tribe,… country, doesn’t have a space in your mind.

Doesn’t matter who is in power as long as he/she have good intentions over a country. These crooks need to go, l mean all of them.

REV. Wambui Njoroge felt that a second order is necessary:

The Kenya System needs to go through a 2nd Order Change.

Even when we change the constitution, it seems to me like the end result is the same.

The system is steeped into the village culture of tribalism…my tribe or our our tribe. This “tribes” is our best friends and our worst enemies.

What makes us think that the only legitimate leadership in Kenya for 50 + years, or so it seems, is between 2 or 3 tribes – Kikuyus, Kalenjins & Luos and from 3 or 4 families. It seems to me like the village mentality…even those of us who left the village followed us around the world.

The reason I say it’s a tribal monster is because Kenyans people don’t vote on issues, nor along party lines. They vote along tribal lines.

Don’t get me wrong I belong to a tribe too. So we are in the village together.

How can we acquire radical 2nd order changes in our political system?
I don’t propose any answers.

Will leave that to the aspiring politicians.
Am safe Praying

Susan an inspiring writer from Werner Robins was trembling and in tears as she wrote:

Yes, it’s an outdated system. But who’s running the system?

Corrupt, very corrupt politicians, powered by the movers and shakers of the economy, who have penetrated the executive, judiciary, legislative and the administrative arms of the govt.

If any meaningful changes have to come, all these arms need to be overhauled. Just like all other countries, politicians are put in office by these power magnates, who risk losing massively if they don’t control politics.

It will take the hand of God to turn the tide propelling our country to wherever it’s headed right now, which is not a good place.

If it’s true that we are indebted to foreign investors to the magnitude of being auctioned off, then there are very many questions that beg to be answered:

How did we get here? Where were the members of parliament elected to protect the constitution (our country); and so did God help them? What are the contents of the contracts/agreements under which the govt borrows these funds? Who knows? Does anyone other than those dealing, know the terms of these contracts? I believe the tax payers should be free to see these contracts before they are signed, because the onus of debt repayment is left to them and their children.

How does a foreign investor get to import foreign labor while very competent Kenyans are disregarded? Talk of taking food from our mouths.

During the campaigns, when Mr. Odinga said that Kenya did not have qualified expertise and proposed importing expats, the president’s response was: “The solution is to build capacity, not to import capacity”. So what happened to capacity building? Do the handshakes have anything to do with anything? Just musing.

All these politicians are together in this. I believe the panacea lies in the young people, because they, for one, don’t understand all this trash about ‘only a few tribes can rule’. Secondly, new, younger blood will have a different mindset, and the dynamism necessary to shake off the old, outdated, old school systems.

They are better placed to compete in and understand the newer technological modern ways of working and doing business.

This is how thriving economies, whose governments understand that this is a new era, are being driven….. by the young people.

If we already don’t have them, then I’d support the suggestion by the President of Kenyan parents in USA that they be trained and nurtured to take over. On that same note, there should be realistic, hard-facts voter education, especially at grass roots level.

Making informed decisions is key to electing the right people to power. There needs to be an end to buying voters just a few meals, to elect the same corrupt pple.

However, if any meaningful changes have to be realized, then we, of necessity, need to uproot all those old trees and trash their seeds. Talking of which, am sure we all don’t agree on Babu Owino as the new young seed of dynamism. Just a digressing note.

I reserve my stand on that. Proper systems are needed to hold people accountable by having uncompromised, independent institutions, where justice is done and is seen to be done.

Jonny a man with few words from Dallas had this to say:

The Judiciary is failing us miserably to say the least: It takes more than demolishing houses, more than mere talks, more than voting ….more than else….to form a nation based on honesty and reality.

VOCAL DIASPORA LEADER DAVID OGEGA WAS NOT LEFT OUT

Cries and cries from every quarter to even making vocal Diaspora leader David Ogega to conclude that Ruto may have obtained his PHD through corruption and thus eroding the dignity and faith of the once high institution of learning called University of Nairobi.

SUSAN IN CONCLUSION ADDED…. THERE IS HOPE! YES!

It can be done, if the perpetrators are just a minority.

But if the leaders and most judges are corrupt, how will justice be done?

The question is if they are willing to end corruption, considering all the repercussions that would follow.

They will just agree in public, then continue as b4. Maybe unconditional amnesty to encourage change would work. Hard to tell.

I believe there’s a general willingness by all the good people for positive change.

Its true not all leaders are corrupt, but are the clean ones doing enough to ensure no corruption happens?

They, of course, might be outnumbered, but abetting crime is as good as doing it.

Most times to wipe off a plague, it calls for contaminants to be quarantined. Of course these are just my views, whether or not they can be applicable is a different story. I already hear all the protests…

Endless and endless cries that can fill a whole novel kept on coming through many Diaspora forums and if we can draw a conclusion, many Kenyans need a breed of completely new crop of  leaders and a total overhaul of the three arms of the Government.

Do we introduce University degrees specializing on combating corruption such are Bachelor of Arts in corruption affairs … all the way to PHD?

What do we do? Or do we go BIBLICAL and say …all things are possible through Jesus Christ!

All the same, desperate as we are, we are optimistic that some Mandela will come out before 2022 and MAKE KENYA GREAT AGAIN.